Myanmar’s poll should have been delayed, says top military chief 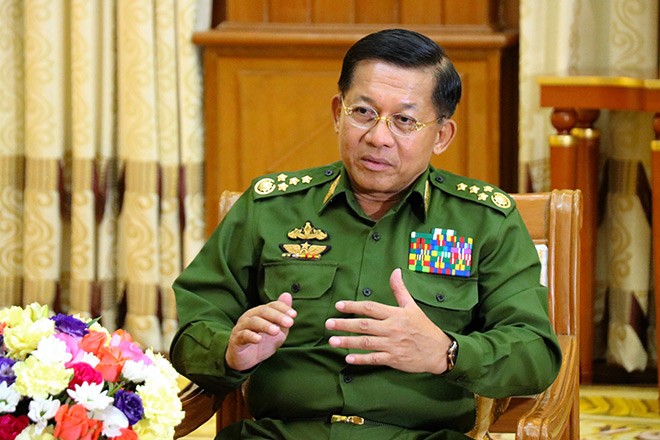 Vote-counting is still continuing in the general election that went ahead in Myanmar on Nov. 8 as scheduled.

However, Senior General Min Aung Hlaing, commander-in-chief of the Myanmar Defense Services (Tatmadaw), questioned the wisdom of holding the election while the novel coronavirus pandemic is raging in his country.

He offered his comments in a written interview with The Asahi Shimbun prior to the poll. The general discussed a raft of other issues ranging from State Counsellor Aung San Suu Kyi-led National League for Democracy’s move to amend the Constitution to rein in the influence of the military to the repatriation of refugees in Bangladesh.

The following are excerpts from the interview:

Question: What is the basic attitude of the military toward this election?

Answer: In 2015, the Union Election Commission (UEC) led by U Tin Aye held elections that were free and fair, according to international observers. This is why the NLD, which was the opposition party at the time, won those elections. Given that the current UEC has had ample time to prepare for the 2020 general elections, it must ensure that the 2020 elections are free and fair.

A: Regarding the issue of the Tatmadaw’s views on any political party, that party’s goals and strategies will be the determining factor. The Tatmadaw is ready and willing to cooperate with all parties who adhere to safeguarding the Basic Principles of the Myanmar Constitution (non-disintegration of the Union, non-disintegration of national solidarity and the perpetuation of sovereignty).

Q: The USDP had been demanding the postponement of the election because of the COVID-19 crisis, but the UEC decided to go ahead with the election as scheduled. How about your opinion about this issue?

A: In Myanmar, general elections are held three months before the new government is scheduled to be formed. In the current situation of the COVID-19 pandemic, my view is that part of this period should be devoted to implementing and stepping up strict COVID-19 prevention and control measures so that the COVID-19 situation comes under control to a certain extent.

Q: How do you evaluate the NLD's administration over the last five years, led by State Counsellor Aung San Suu Kyi?

A: The NLD-led government is trying to do its best, and my views on its success or lack thereof are basically the same as those of the world and Myanmar's citizens.

A: The Tatmadaw has a duty to help realize peace, stability and security of all citizens and its participation in 25 percent of Hluttaw (Upper and Lower house) seats is to work toward this goal. The participation of the Tatmadaw has not impeded the legislative processes.

There are many laws that can be passed without requiring the support of the Tatmadaw representatives in the Hluttaw. The reason why the Tatmadaw now has 25 percent participation in the Hluttaw is because of Myanmar’s unique situation of armed conflict, ongoing peace negotiations with armed groups and the fact that our systems are still not fully mature.

Q: How do you evaluate the current situation of peace talks with ethnic minority armed groups?

A: It was during President Thein Sein’s time that we achieved the signing of the Nationwide Ceasefire Agreement (NCA) by eight ethnic armed organizations. The NCA is the basis for achieving eternal peace, and we, therefore, have to make this foundation strong.

A: The international community is putting pressure on us for political reasons. If we look at the actual situation, it is not so complicated.

Our official records recognize only 135 indigenous ethnic groups. Bengalis or Rohingyas are not among these indigenous groups. The term Rohingya has been formulated by the same people to distinguish themselves from Bengalis.

While we do not object to the Bengali people living inside Myanmar’s territories, the issue of their citizenship, the definition of indigenous people and the rights of citizens and indigenous people are solely matters for domestic law, as in every other sovereign country. We cannot accept international intervention in this matter. The international community is using massive resources (financial, human and material) to apply pressure on us.

Q: The Myanmar government insists that if there is a criminal behavior by the military, it could be resolved inside the country through due process. However, the international community has raised questions about the self-cleaning ability of the Myanmar government. What do you think about it?

A: Within our Myanmar Defense Services, we take appropriate punishment according to our laws against officers and troops who commit violence against civilians, even during counter-terrorism operations.

Q: What is the key to resolving the Rakhine issue, including the repatriation of refugees in Bangladesh?

A: Myanmar has not refused the return of those who fled and is in discussions with Bangladesh. The repatriation of refugees from Bangladesh is taking time due to various causes. It is important to view this in a balanced manner.

(This report was compiled by Aki Fukuyama in Yangon and Akihiko Kaise in Bangkok.)