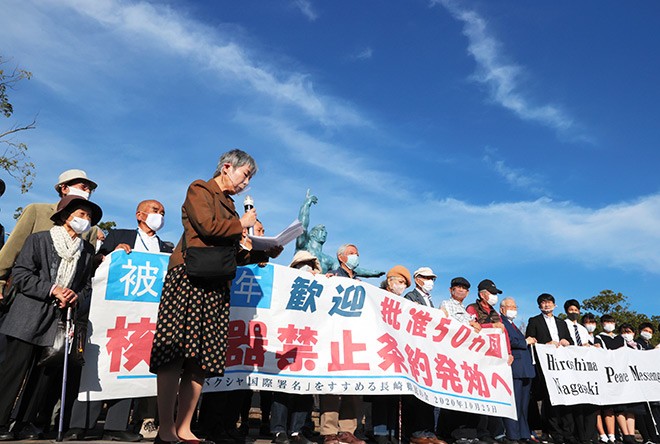 A woman shares her thoughts on abolishing nuclear weapons at a rally on Oct. 25 in Nagasaki to celebrate the 50th country ratifying the Treaty on the Prohibition of Nuclear Weapons. (Minako Yoshimoto)

Following Joe Biden's victory in the U.S. presidential election, atomic bomb survivors in Hiroshima and Nagasaki expressed hopes the country will get back on track working toward a world without nuclear arms.

“I hope it will be a step forward in reviving the stalled momentum toward nuclear disarmament,” Masao Tomonaga, 77, told The Asahi Shimbun, after Biden was reported to have won.

Biden, the Democratic nominee for president, issued a statement on Aug. 6 to mark the 75th anniversary of the atomic bombing of Hiroshima.

“I will work to bring us closer to a world without nuclear weapons, so that the horrors of Hiroshima and Nagasaki are never repeated,” the statement read.

Tomonaga, who heads the Nagasaki Hibakusha Techo Tomo no Kai, a group of survivors of the Aug. 9, 1945, atomic bombing in Nagasaki, said he is relieved Biden secured victory since he has vowed to carry on the work of former U.S. President Barack Obama toward realizing a nuclear-free world.

Donald Trump beat Hillary Clinton in the 2016 U.S. presidential election, running on an “America First” policy. After Trump took office, the United States withdrew from the Intermediate-Range Nuclear Forces Treaty with Russia and unilaterally pulled out of the 2015 Iran nuclear deal.

In contrast, Obama had reportedly considered adopting a policy of no first use of nuclear weapons while he was in office--although it was never realized.

Shigeaki Mori, another atomic bomb survivor who lives in Hiroshima’s Nishi Ward, also rejoiced over the news of Biden's victory.

“Biden is a sensible person, just like Obama,” the 83-year-old historian said happily in an interview with The Asahi Shimbun on Nov. 8. “I want him to put (his country) back on the right track toward nuclear disarmament.”

In May 2016, Obama became the first sitting U.S. president to visit Hiroshima. In his speech during the visit, Obama touched upon Mori’s achievements from decades-long research into the deaths of U.S. POWs in the city’s atomic bombing.

Before leaving the Hiroshima Peace Memorial Park, Obama spoke with atomic bombing survivors who had listened to his speech. He then embraced Mori, who was moved to tears as he talked with Obama.

On Oct. 24, the 50th country ratified the Treaty on the Prohibition of Nuclear Weapons--the minimum number of countries needed for it to take effect. Mori welcomes the big step forward, but remains hesitant when it comes to future moves toward a nuclear-free world.

The United States is the first nation that used nuclear weapons during war and still retains the largest number of nuclear arms. Mori wants the president-elect to do away with the notion that having nuclear weapons can prevent a war.

“Small countries succeeded (in breaking away from nuclear deterrence), so the United States can do it as well,” said Mori.

Nagasaki Mayor Tomihisa Taue called for disarmament in a statement released on the morning of Nov. 8 following media reports of Biden’s win.

“The United States has a huge influence on the world, and its drastic shift to nuclear disarmament can accelerate the move toward abolishing nuclear weapons in the international community,” Taue said, referring to Biden’s Aug. 6 statement on his commitment to pursuing a world free of nuclear arms.

The mayor also called for the United States to extend the new START (Strategic Arms Reduction Treaty), due to expire in February, and set out a viable path for nuclear disarmament at a review conference for the Non-Proliferation Treaty (NPT), scheduled for next year.

(This article was compiled from reports by Rika Yuminaga and Sonoko Miyazaki.)