EDITORIAL: Biden has a duty to correct the wayward course of a superpower 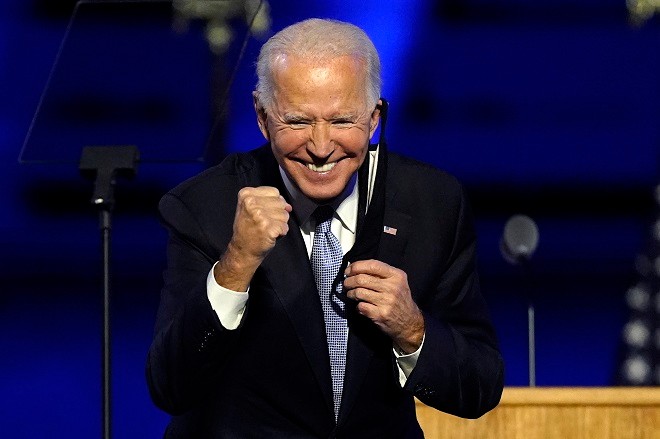 U.S. President-elect Joe Biden faces the central and burning challenge of restoring the spirit of reconciliation in American society and rebuilding the damaged international order when he takes office in January.

Biden should understand that he has a historic duty to correct the course of the world’s leading power.

The former vice president has declared victory in the U.S. presidential election while vote counting still continues in some states. He has won a mandate to govern the nation by garnering the largest number of votes ever cast for any U.S. presidential candidate.

Republican President Donald Trump has failed to be re-elected. Although he has launched a court battle over the outcome of the election, no confirmed information about voter fraud has emerged.

If he has no solid evidence to support his challenge to the counting of votes, Trump should provide full cooperation for a smooth transition without trying to delay the election process without good reason.

HOW TO BRING PLURALISM BACK INTO SOCIETY

Even before Trump came to the White House, America’s prestige in the world was on a long-term downward trend. But the four years of the Trump administration have created a policy chaos on both the domestic and diplomatic fronts.

In addition to fixing U.S. policies, Biden will also need to build up a new leadership to stabilize the international environment.

The election revolved around two main policy topics: the new coronavirus pandemic and the economy. Biden, who criticized Trump’s failure in tackling the public health crisis, which has caused over 230,000 deaths in the United States, has defeated Trump, who stressed his economic policy achievements.

The wildly iconoclastic president will leave office in January. But the deep-seated social factors that put him in the Oval Office will remain unchanged. In addition to racial strife and other conflicts caused by diversity, anger among workers over widening economic disparities will continue straining the nation’s social fabric.

The big question facing the new Biden administration will be how to lead the United States to overcome various divisions in society including those between regions, the sexes and generations and restore the pluralism that defines America’s national identity.

In his victory speech, President-elect Biden said, “I pledge to be a president who seeks not to divide, but to unify.”

We hope he, working with Kamala Harris, who is to become the first female vice president, will find a path to national unity.

Another major policy conundrum for the Biden administration will be what kind of measures can cure the grievances among rural and middle-class American households, which have not enjoyed the benefits of globalization.

During their election campaigns, both candidates passionately talked about their plans to revitalize the domestic manufacturing sector and discussed levels of minimum wages.

RETURN TO RESPECT FOR PRINCIPLES?

From this point of view, Biden’s pledge to pursue “a foreign policy for the middle class” merits attention. He has promised to create jobs at home through investment focused on technological innovation and infrastructure while playing an active role in efforts to establish international rules in trade and other areas.

The world will watch closely whether his policy actions will lead to the United States’ return to multilateral cooperation, as the international community is hoping for, and end the “America First” agenda of the Trump administration.

In the global political landscape, conflict in values between democracies such as the United States, Europe and Japan and authoritarian states such as China and Russia is growing in intensity and bitterness.

In this global political environment, Trump failed to show a strong commitment to the U.S. alliances. He praised North Korea’s autocratic leader for his short-term political gain, while giving short shrift to many of America’s traditional European allies. His inconsistent and unprincipled foreign policy agenda has eroded the moral standards of international politics.

Trump has taken actions that have undermined the network of alliances that supports America’s strength at a time when the United States is battling fiercely with China over global supremacy. His self-contradictory foreign policy seems to be based on a fundamental misunderstanding of the sources of American power.

It is said that the world has again entered an era of great power competition.

As the pandemic has dramatically shown, however, no country, no matter how powerful it may be, can solve global challenges on its own. The only way to deal with such challenges effectively is through multilateral cooperation.

Biden’s first order of business will be to rectify the policy mistakes made by his predecessor.

As he recommits Washington to the Paris Agreement on climate change and to the Iran nuclear agreement, Biden will need to repair the U.S. strategies for nuclear arms reductions and the Middle East.

Then, he should seek to build a new framework for international unity to deal with the new realities based on the postwar order the United States has built and maintained.

Biden has also vowed to host a global summit of the leaders of democracies in his first year in office. The event will have important implications for the future of the world if it demonstrates U.S. commitment to reviving the momentum of democracy at a time when populism is spreading around the world.

To stem and reverse the proliferation of unilateralism, the Biden administration should reaffirm the universal values and principles that are crucial for sustainable stability and growth of the world through joint acts with the United Nations and nongovernmental organizations as well as other democratic governments.

JAPAN NEEDS A NEW VISION FOR ITS INTERNATIONAL ROLE

Obviously for Japan, its relationship with the United States will continue to be of critical importance. But one important lesson the world has learned in the past four years is that overreliance on one major power is not a wise strategy in this new era.

It is still unclear what kind of policy the new U.S. administration will adopt toward China, but the relationship between the two leading powers will mostly likely remain strained and fraught with tensions.

As a nation with important ties with both countries, Japan will have to devote more effort to enhancing its cooperation with Europe, Australia and other Asian nations.

Tokyo needs to ask the Biden administration to act on a keen awareness of the U.S. position as a Pacific nation and adopt a consistent policy of maintaining its involvement in Asia.

Prime Minister Yoshihide Suga’s policy of promoting the “Free and Open Indo-Pacific” initiative should be aimed at creating a framework for promoting democratic values such as the rule of law and respect for human rights, not a military alliance.

In this respect, Suga should find effective ways to work closely with Biden, who has pledged to revive principles.

The mission of mapping out and implementing plans to push the world into a post-Trump era should be shared by the entire international community instead of being entrusted to the United States alone.

In 2021, when this mission is to be launched, Japan should set out to pursue a new, multilateral and independent foreign policy anchored by its traditional pacifist principles.