Suga plays dumb and lawmakers on both sides are dumbfounded 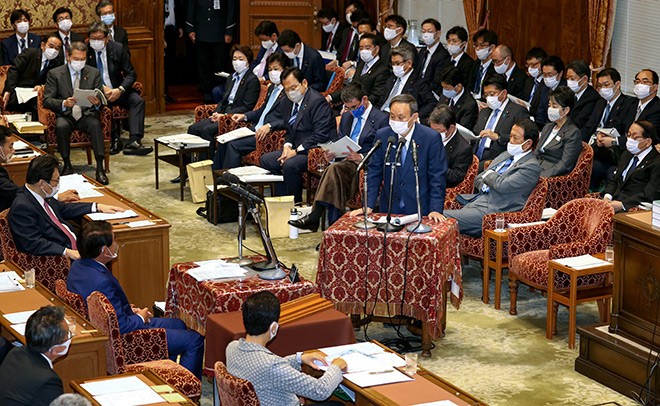 When he served as chief Cabinet secretary under his predecessor, Shinzo Abe, Suga earned the wrath of the press corps for frequently refusing to answer questions from reporters at his daily news conferences, often scorning the queries as “irrelevant.”

In the top leadership position, Suga shows no sign of changing course and typically gives short shrift to issues raised by the opposition camp by stating, “I want to refrain from replying.”

His refusal to engage is causing consternation among many lawmakers, including even those in his Liberal Democratic Party, who are now questioning his ability to be accountable.

He repeatedly used the expression “I want to refrain from replying” at meetings of the Upper and Lower houses, as well as the budget committees of both chambers, between Oct. 28, when the Diet's questioning session began, and Nov. 6, according to an analysis by The Asahi Shimbun.

During that period, Suga, other Cabinet members and government bureaucrats spoke on 1,250 or so occasions and they resorted to the term nearly 80 times.

The most cases, 48, came when they were asked about the government’s rejection of six scholars recommended by the Science Council of Japan as its new members.

This issue is the most pressing one facing the Suga administration, which has drawn heavy fire from academia over perceived government interference in academic freedom in light of the fact the six professors in question held views that were at odds with policy positions espoused by Abe.

Suga relied on the expression 42 times, while other Cabinet members and senior government bureaucrats gave the same response on six occasions.

The prime minister tends to clam up when he is pressed to elaborate on an initial response.

On Nov. 2 during a Lower House Budget Committee meeting, for example, Suga said his decision to reject the appointment of the six professors to the council was based on his belief of an “imbalance” in terms of the number of universities represented in the body.

When an opposition lawmaker demanded a more detailed explanation by pointing out one of the six is from a university that does not have any other member in the council’s 210-strong roster, Suga refused point-blank to answer four times in a row, citing a personnel issue.

Four days later at a meeting of the Upper House Budget Committee, he used the same expression 12 times over the course of about 30 minutes when he was pressed for details of prior dealings between the government and the council before the official appointments were announced.

Suga also evaded questions with regard to a remark by Mio Sugita, a Lower House member of the ruling party, who told a party gathering in September that women can easily lie about sexual violence, and the prosecution of former Justice Minister Katsuyuki Kawai and his wife, Anri, an LDP lawmaker in the Upper House, over a massive vote-buying scandal.

As chief Cabinet secretary, Suga was renowned for his terse replies to reporters. Instead of elaborating on an answer, he would resort to saying, “It is not a problem at all,” or “Your point is irrelevant.”

Reporters were left twiddling their thumbs, unable to press him further.

As prime minister in the Diet, he frequently reads from statements prepared by bureaucrats, in addition to skirting around questions.

Now, not only opposition legislators, but LDP lawmakers are voicing doubts about his ability to answer questions.

Yuko Mori, a member of the main opposition Constitutional Democratic Party of Japan, put it bluntly: “He can hardly handle Diet sessions if he takes the same approach as he did as chief Cabinet secretary. He is an influential politician, but he is not capable of answering questions.”