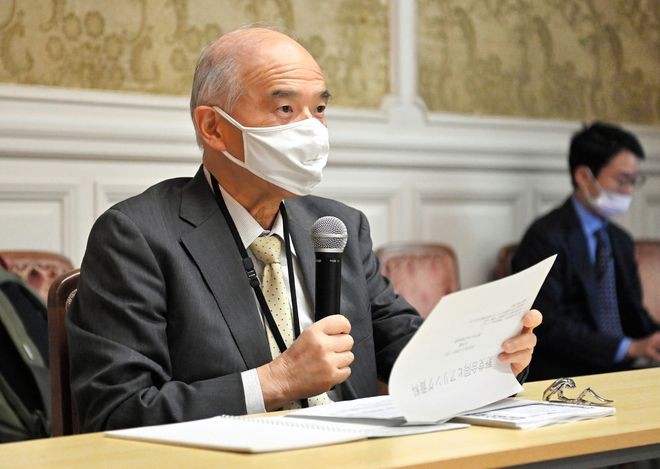 Takashi Onishi, a University of Tokyo professor emeritus and a former president of the Science Council of Japan, speaks at a Nov. 9 hearing held by opposition lawmakers over Prime Minister Yoshihide Suga’s refusal to appoint six scholars to the council. (Kotaro Ebara)

A former president of the Science Council of Japan on Nov. 9 contradicted Prime Minister Yoshihide Suga--twice--regarding the process of appointing members to the council.

Takashi Onishi, a professor emeritus of urban engineering at the University of Tokyo, told a hearing held by opposition lawmakers there was no “adjustment” made when an advanced list of recommended members was shown to a senior government official.

“It was not an adjustment but a prior briefing,” Onishi said.

In Suga’s various and often vague explanations for his unprecedented decision to reject six council-recommended scholars in October, he said that adjustments made before the council’s official recommendations “did not work.”

“There used to be a certain adjustment made between the secretariat of the Cabinet Office and the Science Council chair through various exchanges of views before the council submitted formal lists of recommendations of scholars for membership,” Suga said in the Diet.

Opposition lawmakers said Suga’s statement shows that he had run political interference in the selection process of members to the supposedly independent council.

Onishi, who served as council president between 2014 and 2017, said there were never any adjustments, and that the council only presented the advanced list of recommended members to comply with the unusual request by the prime minister’s office in 2017, under the Abe administration.

“Selecting members for the Science Council is not like the other appointment system (for government ministries and agencies),” Onishi said. “I thought that providing a detailed explanation (before submitting formal lists of membership recommendations) would help the prime minister’s office recognize the difference.”

Half of the council’s 210 members are appointed by the prime minister based on the council’s recommendations every three years as stipulated by the Science Council’s law.

To protect the council’s independence, lawmakers have said in the Diet that the prime minister’s approval of the recommendations was a mere “formality.”

Suga broke with precedent by refusing to approve membership to the six scholars, who had previously criticized government policies.

Suga has denied criticism that he violated academic freedom with the rejections, but he has not clearly explained why those six academics were denied membership.

The prime minister said in the Diet that he has had various “concerns” regarding the council since he was chief Cabinet secretary under the Abe administration.

“I met Suga several times when he was chief Cabinet secretary, but I never heard such concerns from him,” Onishi said. “It’s hard to believe that he has long seen problems in the council.”