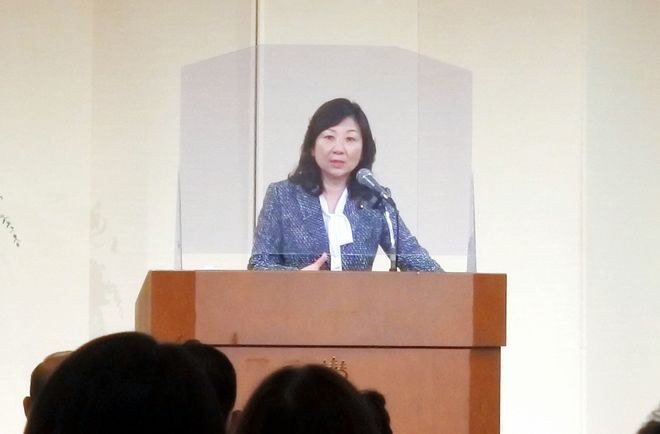 Seiko Noda speaks at a fundraising party in Nagoya on Nov. 9. (Yuichi Nobira)

Kamala Harris’ historic ascension in the United States elicited a sense of vindication and hopes for change by a Japanese woman who has long been denied a chance for a similar rise in power.

“In the United States, a country said to be more conservative than Japan, a Black woman has been elected to be the next vice president,”

Noda, 60, a nine-term Lower House member, has made no secret of her desire to become Japan’s first female prime minister.

She has tried to run for president of the male-dominant LDP at every opportunity over the years, most recently, after Shinzo Abe announced his sudden resignation in late August.

But each time, she could not gain enough support from fellow LDP lawmakers to file her candidacy.

Noda said the victory of Harris, who will become the first female U.S. vice president, was a symbolic event that “will widen our possibilities” and could help reverse the situation in Japan where most leadership positions are held by men.

Noda also noted that the United States this year is celebrating the centennial of women’s voting rights. Japanese women were allowed to vote after the end of World War II.

“We (in Japan) have not turned a century,” she said. “I will try my best to build a relationship in which the LDP can stand on an equal footing with the United States and have discussions on (women’s participation in politics).”

She also reiterated her ambition to run for LDP president.

“My longtime goal is for a woman to at least stand as a presidential candidate in the party’s election and state her policies from the perspective of women,” Noda said.