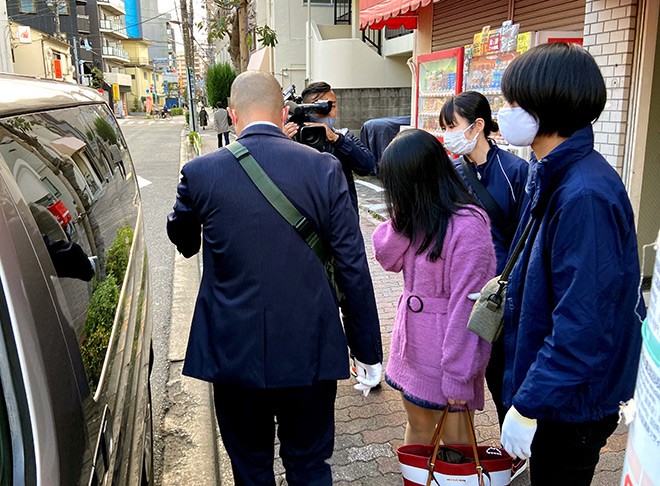 Police ask a woman in purple clothing on Nov. 9 to voluntarily accompany them for questioning on allegations of having foreign women work at her sex parlor in Tokyo. (Nobuaki Tanaka)

A Japanese man and a Chinese woman who operated a Tokyo sex parlor have been arrested on suspicion of hiring Vietnamese women to provide sexual services to clients after they entered Japan on technical intern trainee or student visas.

The pair are accused of running a parlor that dispatches sex workers, named Bi Wonderful, in Tokyo’s Arakawa Ward.

The women entered Japan to learn technical skills or to study, but they lost their jobs due to the coronavirus pandemic. They were unable to return to their country as they could not afford a ticket home.

The suspects are accused of violating the immigration control law by aiding illegal employment.

Police on Nov. 9-10 searched a multitenant building and a rental room where women waited, the sources said.

They have arrested three Vietnamese, aged 24 through 35, on suspicion of violating the immigration control law by engaging in activities that foreign nationals are not permitted on their visas.

The women told police that they worked in the sex industry due to the difficulty of returning to Vietnam or the need to send money to their cash-strapped families back home after the pandemic hit, according to the sources.

Japan’s system to accept technical intern trainees from developing countries is intended to enable them to acquire professional skills while in Japan.

However, many have fled their employers due to poor working conditions. The pandemic has also significantly strained their economic well-being as many have been let go or forced to accept a steep pay cut.

Overseas students are allowed to work part-time jobs such as at restaurants and convenience stores. But they may find themselves in financial difficulties for similar reasons, with little financial resources left to fly home.