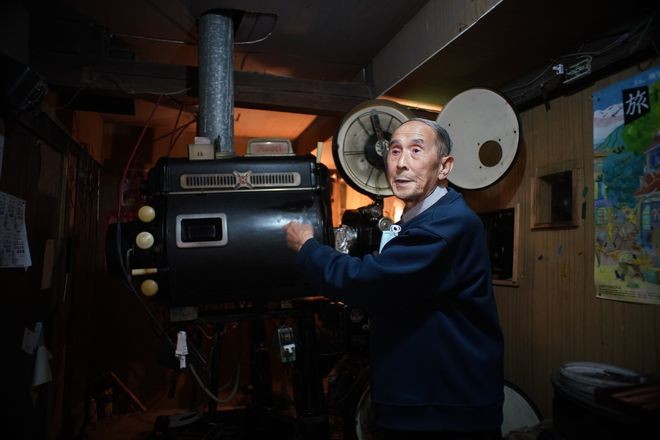 Shuji Tamura stands in front of his carbon projector, which escaped damage in the flooding, in Motomiya, Fukushima Prefecture, on Oct. 7. (Shigetaka Kodama)

MOTOMIYA, Fukushima Prefecture--Shuji Tamura has grown despondent over being unable to directly thank people who helped to rescue his 106-year-old movie theater.

The Motomiya Movie Theater, located in a three-story wooden building on a back street about a three-minute walk from JR Motomiya Station, has experienced all sorts of problems over the decades, including flooding caused by Typhoon No. 19 in autumn last year that threatened to close the theater for good.

After word about the flooding damage to the theater and its film reels spread on social media, offers of assistance arrived from across the nation.

The movie theater in a residential area was repaired enough to allow for plans to hold a revival screening event in spring this year.

“Many people helped me,” Tamura, 83, said. “I would like to show visitors how well the films damaged by the flood were restored.”

But the event was postponed because of the novel coronavirus pandemic.

Tamura is now waiting for a chance to reopen the theater at least one more time.

Local residents opened the theater in 1914 as a “community center.” Tamura’s father bought the theater during World War II, and after the war ended, it became a popular place.

However, attendance dwindled after more households bought TV sets. In 1963, the theater was closed down.

Tamura had learned how to use a cinema projector when he was a child. Although he inherited the theater from his father, Tamura decided to work as an automobile salesman after the theater closed.

However, he never lost his passion for the theater.

His family wanted to sell it, but Tamura refused.

“After my retirement, I would like to welcome movie-goers again,” he said.

In his spare time, he adjusted the cinema projector, took care of the films and cleaned the theater.

By the time he reached retirement age, multiplexes were mainstream, and film industry had become much more digitized. Tamura felt it would be difficult to make the theater profitable.

About 10 years ago, he held a free screening event on the request of an eye doctor, an avid movie fan.

The visitors praised the retro-looking theater for its use of film in the 1957 carbon projector that uses flashing carbon rod as a light source.

The dimly-lit lobby still features many posters of movie stars, such as Kinya Kitaoji and Akira Kobayashi, and of films released during the Showa Era (1926-1989). About 100 wooden chairs are located on the concrete floor inside the theater.

The theater attracted movie fans from around Japan.

Typhoon No. 19 in autumn last year caused the Abukumagawa river and its tributaries to flood. The Motomiya city center was inundated, seven people died, and more than 2,000 houses and buildings were damaged.

Flood water from a river reached a height of about 80 centimeters in Tamura’s theater and his home about 150 meters from the venue.

Half of the 400 film cans on shelves on the first floor of his house were drenched in muddy water.

Tamura’s daughter posted messages on social media, such as: “The battle with mud has just started,” and “Do your best, films!” She also showed pictures of Tamura and his supporters cleaning inside the theater.

A manufacturer in Kanagawa Prefecture sent 10 boxes of film cans to the theater, while a movie theater in Morioka, Iwate Prefecture, delivered a film-editing machine.

About 30 people affiliated with the film industry in Tokyo showed up at the theater to help clean and dry the film. The effort led to the restoration of about 100 films.

Tamura wanted to thank those people and movie fans, so he decided to hold a free screening event during the long holidays in May.

However, that timing coincided with the rapid spread of the novel coronavirus in Japan.

Tamura had to call off the screening to prevent the expected crowd from becoming a potential virus hotspot.

He continues to wait for an opportunity to welcome the movie fans to the theater again.

A flier on the wall of the lobby says: “Special Preview. A half year has passed since the flood. Reviving carbon projector.”

But the date of the preview has not been written on it.

Tamura looked into the distance and mumbled, “I am so sad because I can’t write the event date on it even now.”