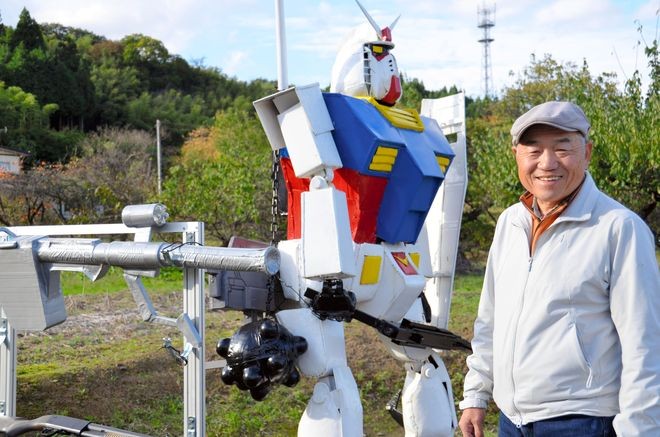 Katsumi Abe poses with the “Hetare (weakling) Gundam” statue in Fukushima on Oct. 15. The robot has too many weapons to carry, so some of them are displayed on a rack by the side. (Shoko Rikimaru)

FUKUSHIMA—A “weakling” Gundam warrior statue is now armed to the teeth after failing to put up much of a fight when its rifle was stolen.

The rearming effort was spearheaded by Katsumi Abe, a community leader who initially had no interest in the iron statue but eventually found that he shared similarities with the wobbly robot.

The 2-meter statue goes by the name of “Hetare (weakling) Gundam,” modeled after the robot warrior from a popular Gundam anime series. It was donated to the community in Fukushima by an amateur iron craftsman around 10 years ago.

The statue faces a vast expanse of rice paddies with its back to a plastic tent and a handwritten signboard that reads, “Unattended sales: Vegetables for 100 yen ($0.95).”

In early May, Abe was at his home in the prefectural capital when an acquaintance phoned and asked, “Has the rifle been moved somewhere else?”

Worried, Abe, 71, drove to an unoccupied plot of land by the side of a community assembly hall where Hetare Gundam stands.

The black “beam rifle,” weighing up to 10 kilograms, was indeed missing from the robot. The fixture wire had been cut.

Abe does not belong to the generation of passionate fans of the Gundam series, which began airing in 1979, and largely ignored the robot in the early years.

But he began to see a reflection of himself, a onetime “outsider,” in the statue.

Abe moved from Chiba Prefecture to the Fukushima district, where his wife’s family home stands, about three decades ago.

He didn’t understand the local dialect, so 30 percent of conversations were unintelligible to him.

However, Abe was later embraced as a member of the community after he was invited to join a local softball team, helped to coach children and attended drinking parties.

Encouraged by his neighbors, Abe has been serving as head of the district community for nearly 10 years.

His affection for the statue started to grow after he saw out-of-towners taking pictures of Hetare Gundam on weekends.

He even acquired a habit of talking to the statue in his mind whenever he went to the assembly hall.

After the Fukushima nuclear disaster in 2011, some workers dispatched to decontaminate the area offered to repaint the statue. Abe was pleased with the result; the robot looked spanking clean.

He said he finds the weakling Gundam lovable because it “does not look natty and appears slightly wobbly.”

After the theft of the rifle was covered in media reports, Abe received offers of help from strangers.

“I made this one,” an elementary school boy from Tochigi Prefecture said as he offered a wooden rifle. “Please use this one instead.”

A teacher from a local senior high school contacted Abe and said, “I worked with my students for a week to make a weapon.”

Everybody looked happy as they installed their handmade weapons, some made of iron and another consisting of plastic bottles, on the robot.

The statue has received six new weapons. It carries one on its front and others on its back.
Neighborhood residents built a rack to display the extra weapons and installed a surveillance camera to thwart additional thefts.

Abe says that at his age, his body shares another similarity with the weakling warrior.

“More weapons would only add more weight,” Abe said as he smiled at the statue. “The robot would feel pain in its back and knees, so I would say ‘No thanks’ to more offers of weapons.”