U.S. to hold economic talks with Taiwan this month--Pompeo 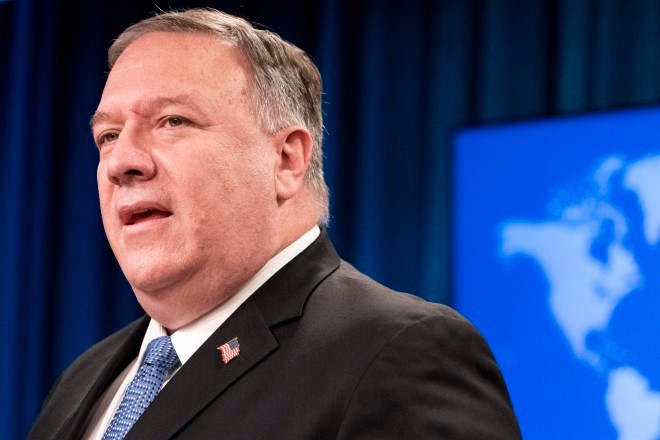 Secretary of State Mike Pompeo speaks during media briefing on Nov. 10, 2020, at the State Department in Washington. (AP Photo)

WASHINGTON--U.S. Undersecretary of State Keith Krach, who angered China with a visit to Taipei in September, will lead economic talks with Taiwan this month, Secretary of State Mike Pompeo said on Tuesday.

Pompeo told a news conference that Krach would lead the Economic Prosperity Partnership Dialogue with Taiwan on Nov. 20. He said the talks would include ensuring safe and secure supply chains and 5G security.

“The dialogue signifies that our economic relationship with Taiwan, a vibrant democracy and a reliable partner, is strong and growing,” Pompeo said.

Taiwan’s representative office in Washington said Deputy Minister of Economic Affairs Chen Chern-chyi would lead Taiwan’s delegation to the U.S. capital for the talks, which would be held both in-person and virtually.

“Other heads of related agencies will attend the talks through video,” it said.

China has been angered by greater U.S. support for Taiwan, including recent visits by Health Secretary Alex Azar in August and Krach, the undersecretary for economic affairs, in September.

Krach was the most senior State Department official to visit Taiwan in four decades after being named to head a new bilateral economic dialogue with the island.

The United States, like most countries, has no official relations with Taiwan, which China claims as sovereign territory, but Washington is required under U.S. law to provide Taipei with the means to defend itself.

China stepped up military drills around Taiwan as U.S.-China relations deteriorated in the run-up to the Nov. 3 presidential election, which was won by President Donald Trump’s Democratic challenger Joe Biden. Biden is due to take office on Jan. 20, but Trump has yet to concede defeat.

Analysts expected the closer economic engagement will continue under a Biden administration.

“If anything, a Biden administration will want to strengthen such initiatives,” said Gerrit Van Der Wees, a Taiwan expert at George Mason University.

Douglas Paal, a former U.S. representative in Taipei, said there was “plenty to indicate continued warm relations between the Biden administration and Taiwan, judging from many long-time friends of Taiwan in Biden’s entourage.”

Taiwan has long sought a free trade agreement with the United States, but Washington has complained about barriers to U.S. imports. In August, Taipei paved the way for an eventual deal by announcing an easing of restrictions on U.S. pork and beef imports that is expected to take effect on Jan. 1.

Last month, Frank Jannuzi, a key Biden aide when the president-elect was in Congress, wrote that Washington should prioritize free trade negotiations with Taiwan to encourage others, including Britain, the European Union and Japan, to follow suit.