Foreigners could die with no pandemic aid, group says 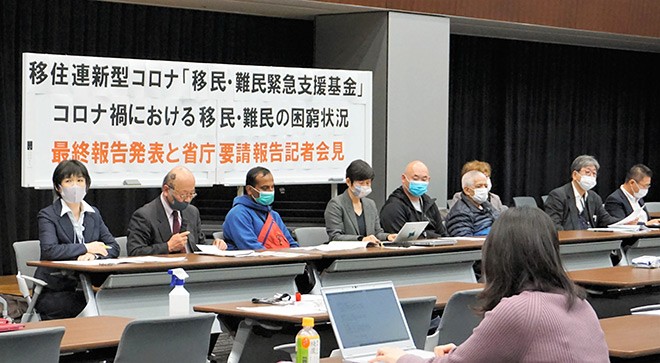 A support group has warned that foreign nationals in Japan struggling in the COVID-19 pandemic could die of starvation and sickness or kill themselves unless the central and local governments provide financial aid.

Solidarity Network with Migrants Japan, known as “Ijuren,” held a news conference in Tokyo on Nov. 10 and said the situation must be addressed immediately.

Michael Nakamura, a member of the group who has offered shelter to foreigners in Oizumi, Gunma Prefecture, said local government officials have denied their requests for public assistance.

“Their rights to live as human beings have been completely ignored,” Nakamura said at the news conference.

Although foreign residents are eligible for government relief programs this year, non-Japanese without resident status have been left out.

Ijuren set up an emergency fund for migrants, refugees and others denied public assistance in May, when the virus spread around the country.

The fund collected about 50 million yen ($475,500) in donations from individuals and groups.

The group said it handed out 30,000 yen each to 1,645 foreigners, including refugees, technical trainees who have lost their jobs, students who have been unable to return to their countries and those who have overstayed their visas.

Kurds made up the largest group of recipients, with 597, followed by 185 Vietnamese and 144 people from Myanmar.

Mohammad Falid, from Bangladesh, said he came to Japan 17 years ago, and now has two children.

When he was switching jobs, the new employer canceled the job offer. He has since been on a short-term visa that does not allow him to work.

The 42-year-old has been struggling to make ends meet, unable to pay rent and living with no food.

“I want a work visa that allows me to work at least 28 hours a week for my children,” he said.

Ippei Torii, who heads Ijuren, said, “Now is the time for (the central and local governments) to help foreigners who have supported Japan for a long time.”