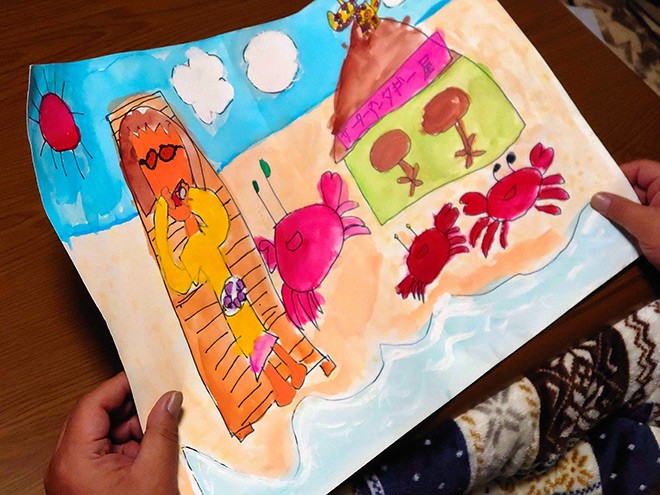 A drawing by a 12-year-old girl living in Nagoya made when she was in elementary school depicts a family outing. (Provided by the father)

A single father in Nagoya has adopted lifestyle rules and routines to financially survive the COVID-19 pandemic. But he fears the belt-tightening changes will not be enough.

The 49-year-old shops at supermarkets in the late afternoon when discount seals are applied to produce. He often makes bulk purchases of pork and freezes the meat he does not immediately use.

He tries to limit daily food expenses for himself and his 12-year-old daughter to between 700 yen and 800 yen ($6.70 and $7.60). And he avoids buying leafy vegetables because they tend to spoil quickly.

But the pandemic has thrown a number of unforeseen obstacles in his way, costing him his job and disrupting his daughter’s education.

His money is running out, and the pandemic shows no signs of ending.

Although the government has provided some temporary assistance for single parents, support groups are calling for more measures amid the prolonged health crisis.

As an emergency stop-gap measure, the central government in August began a grant program providing 50,000 yen to single-parent households that met certain conditions.

Tomohiro Imai, who heads the support organization, said at a news conference on Nov. 10: “The grants are used up quickly for living expenses. But the pandemic continues so there is a need for continued support measures.”

The government, in addition, provides child support grants once every two months for single parents with low incomes. A single child receives 43,160 yen a month, but one condition is that the parent’s income the previous year was under 2.3 million yen.

The Nagoya father was ineligible for the grant because his income last year exceeded the limit. He will have to wait until next year to apply.

“I want help now,” the man said. “That might help me look forward.”

The lives of the father and daughter took a turn for the worse in March, when all schools in Japan closed to prevent the spread of the virus.

The daughter has a hearing disability so the father was worried about leaving her alone at home while he went to work.

Around that time, he was given a work assignment at a different location. But he knew that he would be unable to reach that location on time after taking his daughter to her special needs school in the morning.

He was forced to leave the car sales company he had worked at for 27 years in March.

He has been looking for new work while taking care of his daughter, but he was turned down by two companies.

His daughter, now in the first year of junior high school, occasionally says she wants to eat beef for a change. He can only tell her that is not possible given their financial situation.

He thinks his savings will run out in March.

The Ministry of Health, Labor and Welfare estimates there are about 1.42 million single-parent households in Japan.

About 80 percent of single mothers work, with an average annual income of 2 million yen. Some of these single parents have lost their jobs because of the pandemic.

Both ruling coalition and opposition lawmakers have called for more government grants.

But all Prime Minister Yoshihide Suga said at the Nov. 10 Lower House plenary session was, “We will respond to the circumstances facing single parents after grasping the situation they face.”