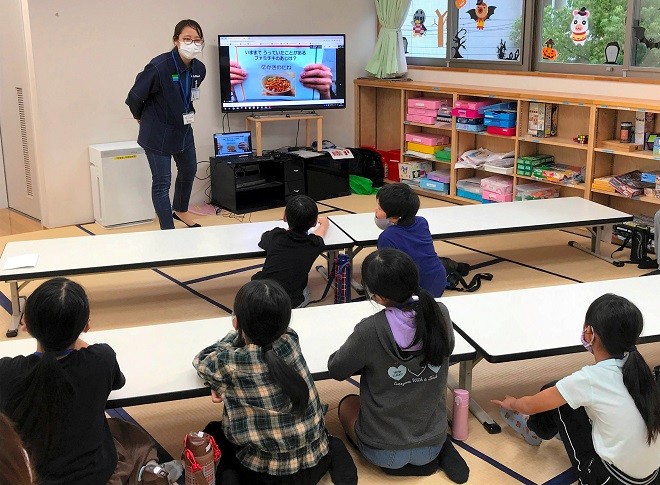 The FamilyMart Co. convenience store chain and other major companies have made adjustments to continue programs to feed poor children during these times of struggle.

To reduce wasted food, businesses are going online to contribute to local communities and society during the COVID-19 pandemic.

Family Mart also uses its Children’s Cafeteria program to teach children the ins-and-outs of the business. But in the new age of social distancing, the company used a video conferencing system for its one-hour program in late September.

The system connected participants’ homes with a FamilyMart outlet in Tokyo. Seventeen children and others from five households could watch a live stream of fried chicken being cooked. They received snacks distributed in advance by the convenience store chain.

In mid-October, a FamilyMart outlet was linked to an after-school child care center in Toda, Saitama Prefecture, enabling people to try such tasks as designing advertisement signs.

FamilyMart started the new business to serve cheap meals to poor children in April last year, offering rice balls, bread, beverages and other products. Patrons can simulate working at the cashier and observe rarely shown aspects of the business under the project.

Admission for elementary school students is 100 yen (95 cents), and 400 yen for children of junior high school age or older.

The children cafeteria program was held at 312 FamilyMart stores across Japan on 357 occasions by the end of February, with 4,000 children and parents participating. But the novel coronavirus pandemic in March made it difficult to hold such sessions.

The online alternative was proposed to “provide unusual experiences while avoiding infection risks.”

The products are now distributed to Yokohama and Kawasaki as well as Saitama Prefecture.
The unsold chicken is still edible, so the service is expected to reduce the amount that would be tossed out.

The endeavor is the first of its kind among leading restaurant chain operators, according to Kentucky Fried Chicken Japan, citing the strict rules under the Food Sanitation Law about distributing precooked food.

A children’s cafeteria in Saitama Prefecture uses the donated chicken for curry and pilaf. It used to serve food directly to those in need, but it closed the restaurant in March and began distributing boxed meals and food ingredients.

Kaori Honma, head of the Saitama Ken Kodomo Shokudo Network (Saitama prefectural children cafeteria’s network), said there is an increasing need for cheap eateries for children because of the outbreak.

“People who had never visited children’s cafeterias before are now flocking to those eateries because their lives have become increasingly difficult during the coronavirus crisis,” Honma said.

Coca-Cola Bottlers Japan Inc. has also supported children’s cafeterias since May by contributing products to those programs in Saitama Prefecture and Hachioji city in western Tokyo.

In July, Coca-Cola started working with Tokyo’s Koganei, followed by Okayama in September.