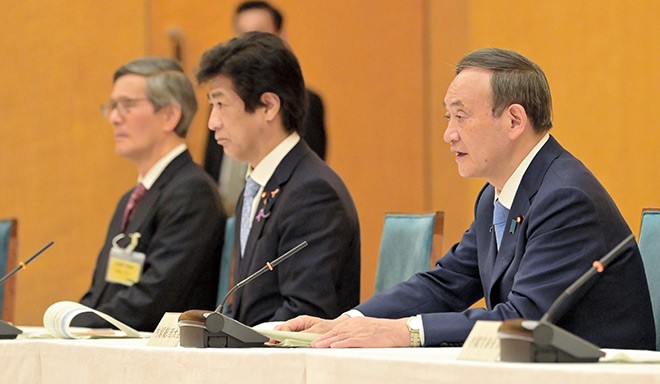 At a government task force meeting on Nov. 10, Suga also said the scale of testing should widen considerably in regions where new cases are surging.

The government’s intensified efforts are aimed at curbing infections at an early stage as the proliferation of both flu and COVID-19 is feared possible in winter.

“Given that the national total of single-day new cases has topped 1,000 on some days, we need to deal with the pandemic with the utmost vigilance,” Suga said. “The government should work at full force to allow social and economic activities as well as measures to slow the spread of the virus to keep going as we prepare for winter.”

His comment followed a set of urgent anti-virus measures recommended the previous day by a government panel of experts on infectious diseases and the economy.

The panel pressed for further efforts to contain cluster infections, to get people to understand that drinking parties carry an enormous risk of spreading infections, and to ensure that countermeasures are in place at various venues, including restaurants and workplaces.

The prime minister also told the task force meeting that the occupancy rate of hospital beds for COVID-19 patients remains roughly 30 percent, even in regions where outbreaks were reported.

After the task force meeting, Yasutoshi Nishimura, minister in charge of economic revitalization who is also in charge of the government’s response to the novel coronavirus pandemic, underlined the importance of taking action now to keep the disease under control.

“We need to implement measures at this stage to prevent a situation that requires the declaration of a state of emergency,” he said, alluding to the one that was declared in April.

Since October, the daily count of new infections has increased in Tokyo, Hokkaido and the prefectures of Aichi, Gifu and Osaka.

“The number of new infections is clearly increasing,” Osaka Governor Hirofumi Yoshimura said on Nov. 10, when 226 new cases, the highest figure since 255 were reported on Aug. 7, were confirmed in his prefecture. “We are in the third wave.”

A sense of alarm was heightened in Hokkaido on Nov. 9, when the daily number of new patients on the northernmost main island reached 200 for the first time.

Hokkaido Governor Naomichi Suzuki met with Suga in Tokyo on Nov. 10 to request central government assistance to contain the disease. The prime minister said both governments should fully cooperate to respond to the outbreaks.

Government officials are expected to expand funding to secure vaccines for the novel coronavirus and grants to assist workers at hospitals and nursing homes.

They will also consider providing support to small and midsize companies that will introduce telework as a step against the pandemic, extend the “Go to Travel” campaign to help the tourism industry, and continue providing relief packages for businesses to retain their payrolls.