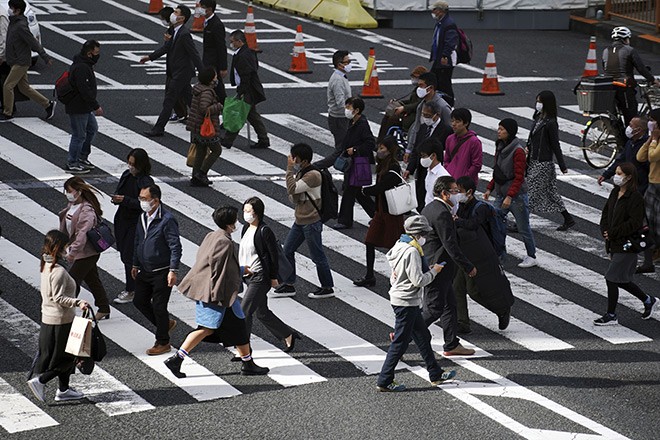 People wearing protective masks to help curb the spread of the novel coronavirus walk on a pedestrian crossing in Tokyo on Nov. 9. (AP Photo)

The infection tallies in the two urban centers have been steadily increasing as winter approaches.

Osaka Governor Hirofumi Yoshimura announced Nov. 11 count, which was one more than the previous high of 255 reported on Aug. 7.

In Tokyo, the daily tally hit 293 on Nov. 10 before surging to 317 the following day, according to metropolitan government officials.

The last time the number exceeded 300 in the capital was on Aug. 20, when 339 new cases were reported.

The Tokyo metropolitan government said the number of serious cases requiring ventilators or extracorporeal membrane oxygenation, also known as an ECMO lung bypass machine, increased by five from the previous day to 38 on Nov. 11.