Silhouette of Shimabara Castle looms over Sea of Ariake 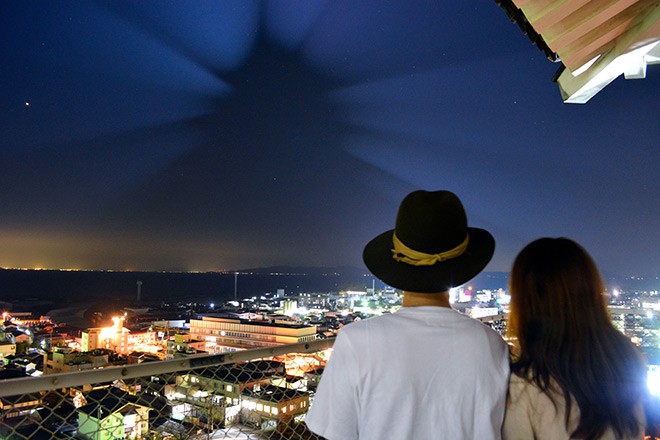 A couple stares at the silhouette of Shimabara Castle's keep, dubbed "Castle Monster," which appears in the sky over the Sea of Ariake from the castle tower in Shimabara, Nagasaki Prefecture, on Oct. 11. (Eiji Matsushita)

SHIMABARA, Nagasaki Prefecture--Centuries ago, the sight of Shimabara Castle outraged peasants to the point of revolt over the high taxes they paid to build it.

Today, the structure inspires a different feeling in those who see its massive shadow looming over the Sea of Ariake off the coast here at night on weekends and holidays.

Looking valiant and magnificent, it is known as the "Castle Monster."

The silhouette of Shimabara Castle's keep appears in the sky when the structure is illuminated by strong lighting.

On the night of Oct. 11, the shadow was seen clearly in the night sky above the Sea of Ariake from the top floor of the castle keep, with shadows spreading radially outward.

A young couple from Nagasaki was absorbed in the spectacular view, letting out an excited cheer.

In August 2016, a staffer of the now-defunct Shimabara Castle promotion association noticed a massive silhouette reflected in the sky over the sea while making preparations for visitors to watch fireworks over Shimabara Port from the observation deck on the fifth floor of the keep.

It was the shadow of the keep illuminated by lighting.

In March 2017, the attraction placed first in the vote for the prefecture's top 10 spiritual energy spots, which was published on a tourism information website managed by the prefectural government.

The silhouette changes shape every day depending on the presence or absence of clouds and their density, the position of the moon and the intensity of the light source.

The silhouette looks as if it is a valiant warrior with multiple swords when the night sky is clear, and the sharp outline of the five-story keep emerges when the sky is covered with clouds.

"We hope spectators take their time and enjoy the 'night at Shimabara Castle' newly added with various values," said Osamu Suetsugu, head of the product planning and sales division at the Shimabara Tourism Bureau.

The castle keep is illuminated between 6:30 p.m. and 9:30 p.m. on Saturdays, Sundays and holidays until March 28. Spectators can also enjoy a bird's-eye view of the night cityscape of Shimabara from the top floor, while they can glimpse the city lights of Kumamoto in the distance.

Eiji Matsushita, based in Shimabara, Nagasaki Prefecture, writes for The Asahi Shimbun.