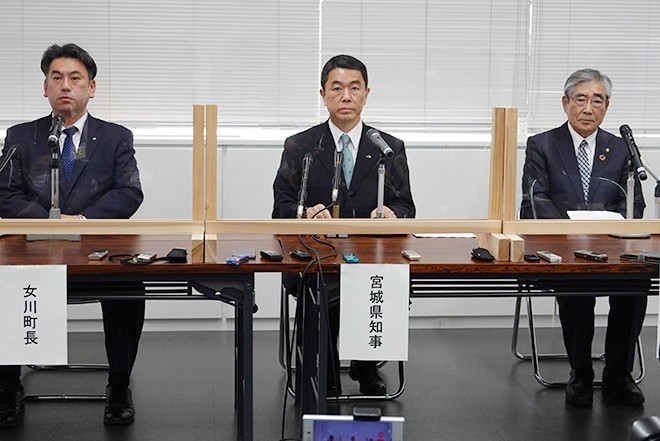 Miyagi Governor Yoshihiro Murai on Nov. 11 said the decision on resuming operations of the No. 2 reactor at the Onagawa nuclear plant was “not an easy one.”

Required safety measures must still be completed at the plant, and questions remain about the evacuation route that will be used in the event of a disaster at the plant, which straddles the municipalities of Onagawa and Ishinomaki on the Pacific coast.

However, residents near the nuclear plant have requested a resumption of nuclear power operations to revive their depleted communities.

“We can expect many jobs to be created if the nuclear plant resumes operations,” Murai said. “Municipalities hosting the plant will also have increased tax revenues through the restart of the plant in terms of fixed property tax and nuclear fuel tax.”

His announcement followed a meeting with the mayors of Onagawa and Ishinomaki earlier in the day, in which the governor confirmed their approval of the planned restart.

Tohoku Electric Power Co., operator of the Onagawa plant, needed the consent from the host communities as well as Miyagi Prefecture although it is not a legal mandate.

The utility expects the reactor, with an output capacity of 825 megawatts, to be brought online as early as in 2023, when it plans to complete an array of projects designed to strengthen the safety of the plant.

“A critical decision was made as we are aiming at a restart,” the utility said in a statement about Murai’s announcement. “We are determined to strive in full force to enhance safety features of the facility.”

If restarted, the No. 2 unit will be the first boiling water reactor in Japan brought online since the 2011 nuclear disaster. The reactors at the Fukushima No. 1 nuclear plant, which suffered a triple meltdown after being swamped by the tsunami, are also boiling water types.

All reactors in Japan were shut down after the Fukushima nuclear disaster. Since then, nine reactors at five nuclear plants have resumed operations. They were all pressurized water reactors located in western Japan.

When the 13.0-meter tsunami hit the Onagawa plant after the Great East Japan Earthquake, the No. 2 reactor building was just high enough to escape the water.

Still, part of the equipment to cool the reactor failed, and more than 1,000 cracks were discovered in the reactor building.

The Onagawa plant has two other reactors. Tohoku Electric decided to retire the No. 1 reactor, but it is preparing to apply for a restart of the No. 3 reactor.

The utility compiled a set of safeguards for resuming operations of the No. 2 reactor, including construction of a 29-meter-high sea wall as protection against tsunami.

In February, the Nuclear Regulation Authority, the government nuclear watchdog, certified the No. 2 reactor as meeting the more stringent reactor regulations put in place after the Fukushima disaster.

The following month, industry minister Hiroshi Kajiyama urged Murai to agree to the restart of the Onagawa plant.

Japan had 54 nuclear reactors before the disaster struck in the Tohoku region.

Since the Fukushima accident, the number has fallen to 33, as other reactors were retired.

The central government needs to bring around 30 reactors online to achieve its target of nuclear energy representing 20 to 22 percent of the nation’s overall energy output in fiscal 2030.

The government hopes the restart of the Onagawa nuclear plant will prompt other municipalities that host boiling water reactors to accept a resumption of their operations.

(This story was written by Shinya Tokushima and Susumu Okamoto.)