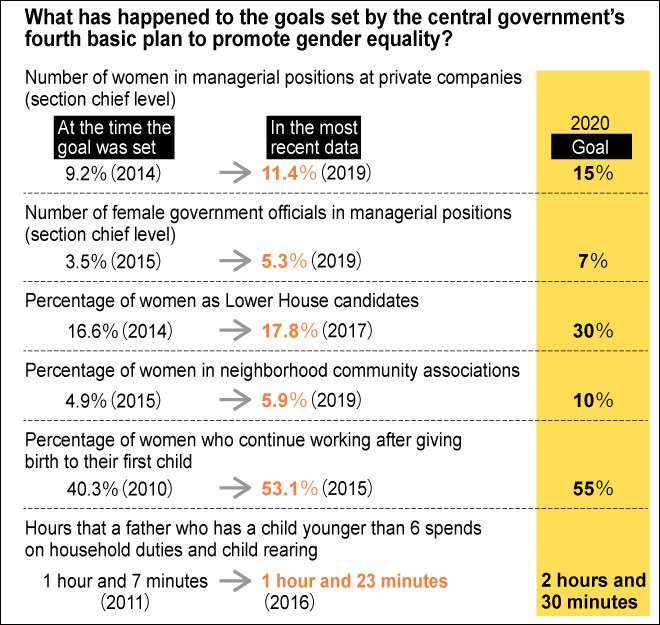 With the government's long-standing aim to promote gender equality falling by the wayside, it appears that the goals will be kicked down the road again.

In a report submitted to Prime Minister Yoshihide Suga on Nov. 11, the Council for Gender Equality recommended that targets of up to 30 percent for women as political candidates and managerial positions be pushed back 10 years at maximum.

The government retained the goals in its second, third and fourth plans since 2003. But they have not been achieved, as well as many other targets.

“We need to do introspection on the fact that the plan has not sufficiently progressed and undertake an effort," Suga said after receiving the report.

The government plans to adopt a fifth basic plan to promote gender equality, which will start in fiscal 2021 and continue for the next five years.

It is expected to add numerical targets for each policy and others in the basic plan and have it be approved by the Cabinet by the end of the year.

In its report to Suga, the Council for Gender Equality concluded that the past goals “have not necessarily been shared among the entire society and necessary reforms have not progressed.”

The report then suggested that political and economic fields, in particular, need to facilitate the participation of women.

To increase the percentage of women in national elections, the report recommends the government to urge political parties to institute a “quota system” to field a number of female candidates.

It also included a proposal to allow over-the-counter access to emergency contraceptive pills without a doctor’s prescription for the first time. Such a proposal was not included in the past four basic plans.

The report also strongly recommended revising a law to overhaul the child support payment system to reduce the number of back payment cases that have been prevalent.

It also mentioned a revision of the requirements for receiving various types of benefit payments and paying contributions from households to individuals.

And it again mentioned a discussion of separate family names for married couples.

Hiroki Sato, a professor at Chuo University who led the drafting of the report, said on Nov. 11 that he hopes “the government will hold an in-depth discussion on the quota system and the issues of separate family names for married couples when it draws up the plan.”

WOMEN LAG BEHIND IN POLITICS, BUSINESS

Women’s participation in politics in Japan has markedly trailed most other countries in the world.

In a survey, the percentage of women in the Lower House is less than 10 percent, ranking 167th in the world.

A new law established in 2018 requires a political party to attempt to field an equal representation of male and female candidates in a legislative election.

The following year, the percentage of female candidates running in an Upper House election reached 28.1 percent, the highest ever.

But it was still far from having an equal number of male and female candidates on the ballot.

In September this year, Hakubun Shimomura, the ruling Liberal Democratic Party’s then Election Strategy Committee chairman, submitted a proposal to party Secretary-General Toshihiro Nikai to implement the quota system to meet the goal of increasing the percentage of female lawmakers in the party up to 30 percent by 2030.

But no visible action has been taken since then.

Nikai on Nov. 9 said about the issue at a news conference, “It’s not what the party says. People decide (such things). It will not go as (they) had expected.”

In the selection of candidates, incumbents--mostly male--are prioritized over fielding new faces. It is therefore not easy to increase the number of female candidates, according to party sources.

“It is regrettable but our party has no capacity to (do so),” she said.

The largest opposition Constitutional Democratic Party of Japan has discussed a plan to increase female candidates, but the party’s head, Yukio Edano, suggested it will be hard to reach numerical targets.

“Wishful thinking can’t by itself accomplish (the matter),” Edano said.

In the meantime, Keidanren (Japan Business Federation), the nation’s most powerful business lobby, set a goal on Nov. 9 for 30 percent or more of top managerial positions to be held by women by 2030 as part of its growth strategy.

It is the first time for the business group to announce a numerical target to increase the number of female executives in corporate Japan.

Currently, the percentage is 6.2 percent at listed companies.

But Keidanren said diversity is necessary for businesses to survive.

A top Keidanren official said, “Environmental, Social and Governance (ESG) investments that value the way of management have spread rapidly, and the percentage of female executives in a company will become a criterion for judgment.”

The report also mentioned a plan to increase the percentage of female judges for the first time.

In the 2015 Supreme Court decision that upheld the Civic Code that denies the right to choose separate family names for married couples, five judges stated dissenting opinions and of these, three were female.

The report suggested having an equal gender balance to render a judicial ruling is also important in issues related to families and society.

The Cabinet appoints Supreme Court justices, who have been nominated among judges, lawyers and others.

Currently, two of the 15 Supreme Court justices are women.

As of February 2019, three women, a record high, were serving on the nation’s highest court.

But there has not been a woman who has served as a court judge and later became appointed to the Supreme Court.

But according to the Supreme Court, as of December 2019, 22.6 percent of court judges were women. Forty years ago, the percentage was 2.8. And the number has been steadily on the rise.

The percentage of female assistant judges who have served less than 10 years since their appointment to the court as of December 2019 was 34.5.