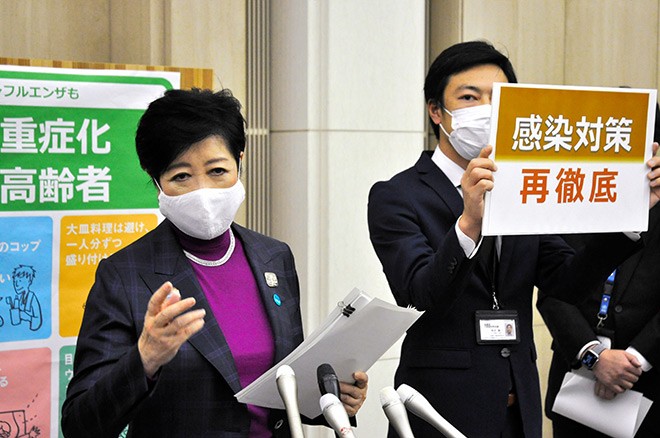 The number of new COVID-19 cases in Tokyo neared the 400 level on Nov. 12, while Hokkaido and Hyogo Prefecture had their worst days for newly confirmed novel coronavirus infections.

The Hokkaido figure shattered the previous record of 200 new cases set on Nov. 9 and represented the eighth straight day for the daily tally to exceed 100.

The Nov. 12 number in Tokyo was 393, the fifth largest since the start of the pandemic and the most since 429 new cases were confirmed on Aug. 8.

The Tokyo metropolitan government said the number of serious cases requiring ventilators or lung bypass machines increased by one from the previous day to 39 on Nov. 12.

The metropolitan government on Nov. 12 decided to keep the capital at the second highest level of alert on its four-level scale for the 10th consecutive week. That level requires continued vigilance by the government.

Tokyo Governor Yuriko Koike told reporters that the rising count is a result of increased testing.

“More and more people are taking a test at their own expense these days,” she said.

The governor also repeated her warning to the public to take precautions, particularly with the winter season approaching.

“Toward the end of the year and the New Year holiday season, we expect people to have more occasions to gather. The risk of infection in such gatherings will likely be high,” Koike said. “I urge (residents) once again to behave in a conscious manner to protect the elderly population and prevent people from developing severe COVID-19 symptoms.”

The Hokkaido government on Nov. 7 raised its alert level from two to three on its five-level system. But that apparently did little to contain the spread of the disease.

Hokkaido Governor Naomichi Suzuki has emphasized that both economic activities and anti-virus measures be maintained.

The central government has contemplated removing Hokkaido from its Go To Travel campaign, which aims to help the tourism industry around the country. But it has kept Hokkaido in the program.