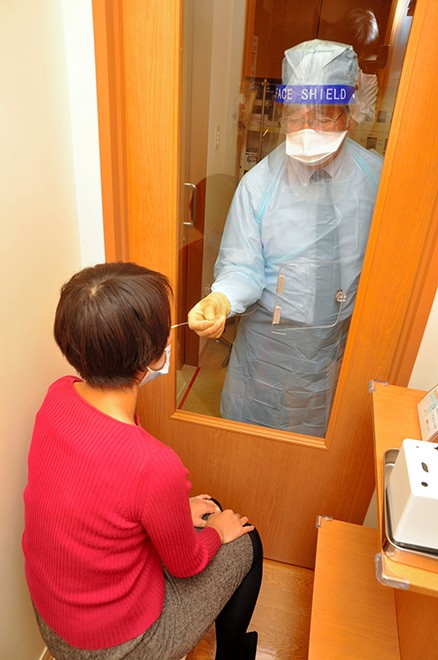 A doctor demonstrates how to perform tests through a glass partition at the Nakata Clinic in Tokyo’s Chiyoda Ward on Nov. 11. (Ayako Tsukidate)

Anyone with a high fever in Japan can now get tested for the novel coronavirus and seasonal influenza at 24,629 facilities nationwide, the health ministry announced on Nov. 12.

But experts wonder if the number is enough.

Anticipating a simultaneous outbreak of COVID-19 and seasonal influenza in the winter season, the ministry had asked local governments to designate facilities that can handle medical examinations and testing by the end of October.

Local governments estimate possible demand for testing at the peak of an outbreak would be 460,568 per day--68,325 tests for the novel coronavirus and 392,243 tests for seasonal influenza.

Whether the names of such facilities are disclosed publicly is up to each government to decide.

Many governments have kept the names undisclosed or only partially disclosed, citing that publicly naming them would attract too many patients and reputations of hospitals that conduct the tests could be damaged by false rumors.

Under the new system, people experiencing a high fever are asked to call their family doctor or a consulting center established by each local government.

Patients will get a referral to such facility after calling their family doctor or other medical professional.

But the number of facilities does not bode well for ensuring smooth operations.

“Some health care institutions handle such inquires 24/7, but others do it on a rotating schedule,” a ministry official said.

“We can’t make an evaluation just by looking at the numbers. But at least as of now, each local government has made the designation," the official noted.

Experts and health care workers have pointed out the system faces a number of challenges, however.

The Tokyo metropolitan government has designated 3,000 facilities for testing. But the number remains small, considering that there are approximately 8,000 general internal medicine clinics in the capital.

Up to about 64,000 tests a day will be needed if an outbreak of seasonal influenza and the novel coronavirus occurs at the same time, according to one estimate.

Calculated simply, each of the 3,000 facilities will have to handle 20 or so tests a day.

If patients rush to designated facilities, the testing process will likely slow.

Nakata Clinic in Tokyo’s Chiyoda Ward, one of the designated facilities, has done a partial interior renovation to prepare for a simultaneous outbreak of the novel coronavirus and seasonal influenza.

The clinic said it received advice from infectious disease experts on the flow of staff and patients to lower the risk of infection.

It conducted a test on 30 patients who developed a high fever during the two-month period until October. All patients had called the clinic before coming to take the test, staff said.

Two tested positive for the novel coronavirus. One had symptoms of pneumonia and was unable to eat.

The clinic performed a simple test, confirmed they were infected with the virus and called a public health center.

A doctor of the clinic concluded that the patients needed to be hospitalized immediately and made the arrangements.

“In a normal situation, making arrangements for hospitalization is a public health center’s job,” said Koichiro Nakata, the director of the hospital.

Nakata fears the process of making the arrangements will become “clogged” if the number of patients rises and public health centers are overwhelmed by calls and requests from multiple health care facilities.

“Our clinic has limited space and we won’t be able to take care of other patients if a public health center can’t immediately find a hospital or accommodation for a patient,” Nakata said.