COMMENTARY/ Mako made clear where her heart lies: She wants to get married

Snapshots from the past three years concerning Princess Mako and Kei Komuro as well as other members of the imperial family. 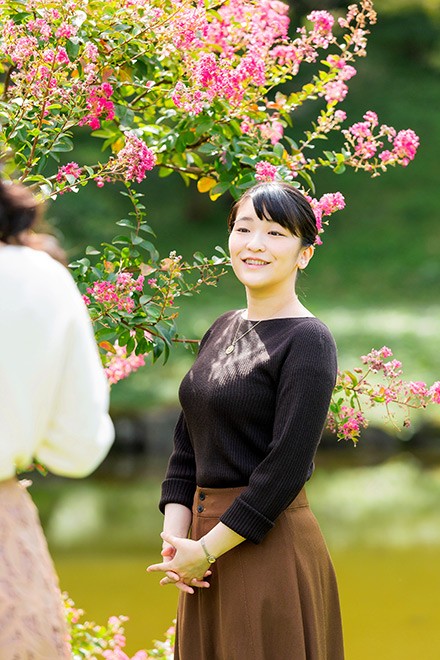 Princess Mako poses for a snap taken by her younger sister, Princess Kako, in front of a "sarusuberi" (crepe myrtle) tree within the grounds of the Akasaka Estate in Tokyo. (Provided by the Imperial Household Agency)

“For us, marriage is a necessary choice to live and honor our hearts.”

That comment, included in a written statement released Nov. 13 by Princess Mako regarding her delayed marriage plans to Kei Komuro, sounded to me like a “cry from the heart” that showed Mako, above all else, wanted to wed her college sweetheart.

No doubt she felt concerned about the flood of negative comments regarding the prospective marriage that has circulated over the internet. For the young couple, the two years since the announcement of the postponement of their marriage plans were likely a long and difficult time during which they had no idea what lay in their future.

Since the postponement announcement, Mako has reportedly suffered bouts of poor health because she fretted about her marriage. At the same time, when she has undertaken her tasks as a member of the imperial family, including official trips overseas, she has offered no glimpse of her inner turmoil or the state of her physical health.

Disciplining herself and maintaining a posture of always trying to do one’s best was I believe more than sufficient to recover the trust of her parents, Crown Prince Fumihito and Crown Princess Kiko, who had also at one time been very concerned about the marriage of their elder daughter.

The marriage between Fumihito and Kiko was a love match in every sense. I have covered the couple from the time they first met in university until their wedding ceremony.

I know based on that experience that their own path to marriage was hardly a smooth one. But they were able to overcome any difficulties because they understood each other so well and probably did not have secrets from each other.

That is the primary reason Fumihito and Kiko were so puzzled and deeply concerned when Mako informed them that she had no prior inkling of the financial problems surrounding the Komuro family that surfaced through media reports.

To his close associates, Fumihito has often pointed to the passage in the Constitution that states “Marriage shall be based only on the mutual consent of both sexes” to demonstrate his intention to respect the wishes of the young couple.

At the same time, Fumihito also asked two years ago that Komuro make the “appropriate response” to the questions that had been raised in the media and to create “a situation in which many people will be convinced and express their happiness” for the nuptials.

However, no clear response has yet to be made from the two sides regarding that “assignment” given out by Fumihito.

At the same time, I have heard that over the past two years Mako has repeatedly talked with her parents to directly address the worries and doubts they harbor.

Such efforts likely contributed to the expression of Kiko’s honest feelings in the statement issued on the occasion of her birthday in September in which she wrote, “I wish to respect her feelings as much as possible.”

Mako and Komuro again expressed their strong intention to marry with wording in the statement that said, “We want to move forward toward marriage.”

They added that Mako’s parents had also expressed their understanding.

As a reporter who has long covered the imperial family, I want to warmly wish that the young couple's dream comes true.