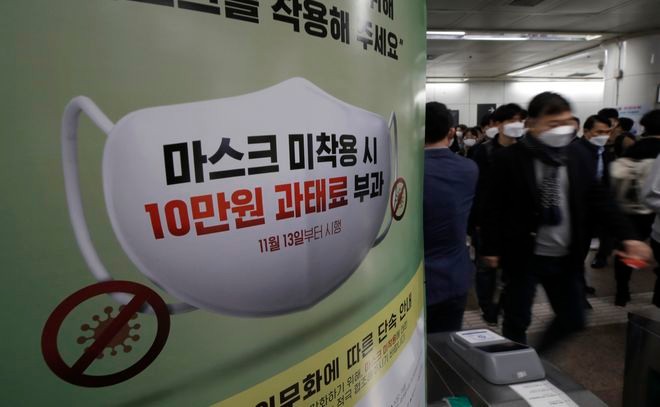 People wearing face masks as a precaution against the coronavirus, walk past near a banner reading: "People who do not wear masks in public will face a 100,000 won ($90) fine," at a subway station in Seoul on Nov. 13. (AP Photo)

That was slightly higher than the previous day's 205 new infections and the highest since early September.

Of the cases, 176 were domestically transmitted and 32 imported. Nearly 70% of the locally transmitted cases were from Seoul and Gyeonggi province, a densely populated area near the capital.

On Saturday, President Moon Jae-in urged authorities and local governments to raise their awareness of the spread of the coronavirus, reinforcing thorough supervision of safety guidelines such as mandatory mask wearing.

South Korea began fining people who fail to wear masks in public on Friday, as the nation's daily infections continued to creep higher.

The latest tally takes the country's total infections to 28,546, with 493 deaths, according to the KDCA.