Veterinarian Makio Yanagisawa works on developing a physical checkup system to prolong the lives of dolphins kept at aquariums. (Video by Nobuo Fujiwara) 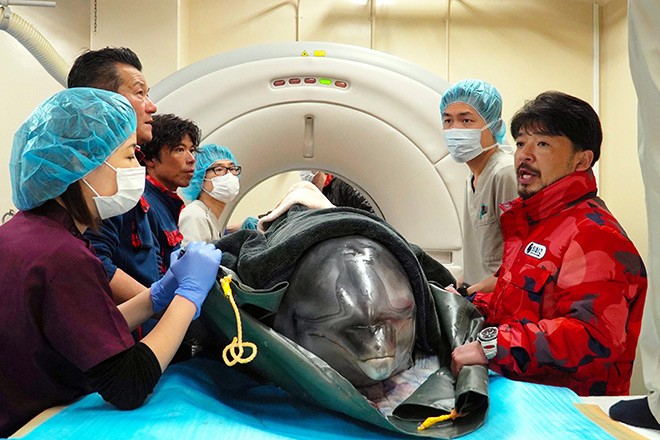 OITA--Jiji’s four-hour trip aboard a 10-ton truck from here took her to an examination table where she was sedated but continued squeaking.

It was the bottlenose dolphin’s second visit to the Miyazaki University Veterinary Teaching Hospital for CT scanning.

The Umitamago aquarium in Oita, where Jiji is kept, has adopted CT scanning, a method commonly used on human patients, to regularly check whether its dolphins are healthy.

The thorough physical checkups were proposed by Makio Yanagisawa, 48, a veterinarian at Umitamago, to enable dolphins to live longer in captivity at aquariums around the country.

The idea came out of his sense of crisis that Japan was trailing the United States and Europe in medical research on dolphins.

Measuring 2.6 meters long and weighing 180 kilograms, Jiji received treatment after becoming entangled in a set fishing net off Miyazaki Prefecture in 2015. A swelling was confirmed in her tail fin at the time, but the cause could not be determined with X-ray imaging.

Yanagisawa had also carried out the first surgery in Japan on a dolphin using anesthesia, working with Shido Torisu, a veterinary professor at the University of Miyazaki.

Through that connection, Yanagisawa asked Torisu, 46, to allow him to study Jiji using the university’s large CT scanner, which is intended for cattle and other animals.

The scanner detected lesions in her tail fin and neck bones. Jiji was diagnosed as suffering from a disorder resulting from brucella, a bacteria often found in wild dolphins.

An antibiotic was administered to Jiji to stem the progression of the disease. The follow-up check in mid-February was aimed at seeing if her condition had changed.

Around 15 aquarium staff members transferred Jiji on a stretcher from her pool to a special tank on the platform of the truck, which took her to the University of Miyazaki.

The CT scan results showed the antibiotic had prevented her condition from rapidly worsening, although a complete recovery cannot be expected.

Jiji was long a popular feature at the aquarium’s shows in which the marine creatures swim, jump out of water and bow to spectators. She is now recuperating at an affiliated facility in Tsukumi, Oita Prefecture.

“I want to raise our nation’s level of dolphin medicine to the world level,” Yanagisawa said.

But it may take a long time before all dolphins kept across the country can be examined with the method.

“Doing CT scanning is impossible without the help of national universities or veterinary colleges,” Yanagisawa said.

CT scanners for large creatures are available only in Hokkaido and Kagoshima and Miyazaki prefectures. The device is priced at more than 100 million yen ($960,000), making it difficult for aquarium operators to buy them.

Katsumata has been caring for marine animals for more than 40 years and succeeded in the first artificial insemination of a bottlenose dolphin in Japan.

“If previously difficult-to-identify disorders become possible to determine, the findings may also be used for diagnosis of the walrus, orca and other large animals,” Katsumata said.

In Western nations, where animal shows and exhibitions tend to be seen as mistreatment from a standpoint of animal welfare, a growing number of aquariums have chosen not to keep dolphins.

Satoshi Morosaka, an associate professor of law at Kanagawa University who is familiar with issues surrounding dolphins, says both aquariums that organize dolphin shows and audiences who watch them should change their attitudes.

“It is important to improve breeding and medical treatment techniques for dolphins kept in captivity,” he said. “But Japan’s credibility could diminish in the international community unless the nation changes its perception that dolphins and other cetaceans are reared for shows.”