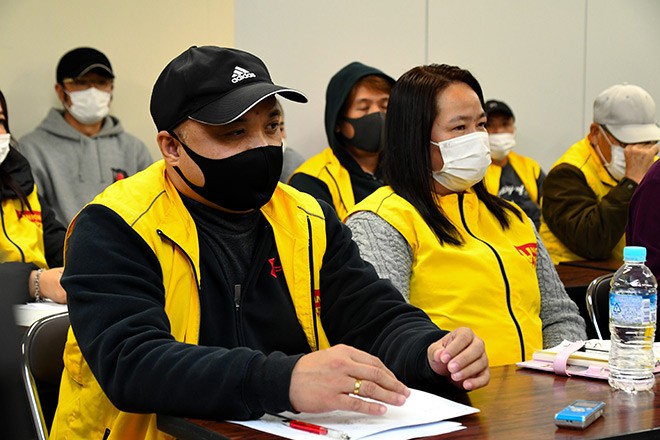 Filipino workers who lost their jobs express fears for their futures in Japan at a meeting with Mie prefectural government officials in Tsu on Nov. 12. (Tetsuaki Otaki)

TSU, Mie Prefecture--Filipinos expressed outrage and requested help to survive after they were dismissed by a Sharp Corp. factory because of sluggish business conditions caused by the COVID-19 pandemic.

According to Union Mie, a labor union based here, 76 of the 93 contract workers who lost their jobs at the factory in Taki in the prefecture were from the Philippines.

They were dispatched by a subcontractor in Matsusaka, also in the prefecture, to manufacture liquid crystal panels at the factory. The notice to end their employment was dated Oct. 14 and cited “deteriorating business” as the reason.

Akai Jinbu, secretary-general of the union, said their situation is “extremely serious.”

“In one case, all the wage earners of one family lost their jobs,” he said.

Before their official dismissals on Nov. 15, the Filipinos voiced their deepening anxieties and frustrations when they met with prefectural officials overseeing employment measures in Tsu on Nov. 12.

One of the Filipino workers objected to being let go after “working there for 16 years.”

Another feared for the well-being of relatives back home without money sent from Japan.

About 30 of the 93 dismissed workers attended the gathering.

One woman said her child in Japan was also rendered jobless because of the pandemic, and there is no guarantee that they will be able to land new jobs in the future.

She also said she has a high school age child to support back in the Philippines, and lately all she can think about is how to subsist with the little money she has left to pay rent and for food.

The meeting with prefectural officials was arranged after the union learned about the planned dismissals.

Union officials urged the prefectural government to hold talks with the subcontractor and Sharp over how to alleviate the workers’ woes, and to provide assistance, such as allowing them to move into public housing.

But the prefectural officials stopped short of promising anything specific, saying they will handle their problems under the existing framework of assistance.

As of the end of October 2019, a record 1.66 million foreigners were working in Japan, according to data from the Ministry of Health, Labor and Welfare.

After the novel coronavirus broke out in Japan, 70,242 workers were made redundant, had their contracts terminated or were very likely to lose their jobs, as of Nov. 6.

The ministry said it is not aware of how many of them were foreigners.

(This story was written by Tetsuaki Otaki and Chika Yamamoto.)