360-DEGREE LIVES: Butterfly larvae that hatch in my garden inspired this video series 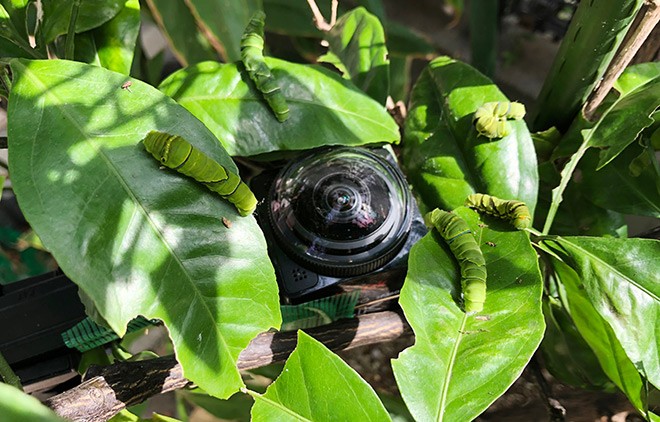 Swallowtail butterflies, including spangles and Asian swallowtails, visit my garden during the summer and autumn months.

Three to four days after they lay their eggs on buds of a tangerine tree, small larvae pop up across the garden.

In summer 2015, while I was digging up weeds under the tangerine tree, I came across several larvae. I felt surrounded by them and came up with the idea of starting this 360-Degree Lives series.

When larvae hatch from eggs, they use camouflage to resemble bird droppings for about 20 days before turning bright green.

Larvae have six legs and use the middle and hindmost ones called prolegs to scale trees.

According to butterfly keeper Nagisa Mizuochi at the Adachi Park of Living Things in Tokyo’s Adachi Ward, the large spots that appear to be eyes are actually false eyespots to scare away birds and other predators. They have six single eyes on each side of the head at the tip of the body.

I had never seen larvae grow into adults and fly away. So, I tried to raise larvae for the first time this year, expecting to see them emerge from their chrysalis forms and flutter their wings.

As I fed them new sprouts of young leaves, they grew bigger by the day and developed into bright green pupae.

But several days later, half of the pupae had turned into brown.

Seeing their photos, Mizuochi said, "Unfortunately, there are tachinid fly larvae in them."

It came as a fresh reminder of how hard it is to live in nature and how difficult it is to keep the cycle of life turning.

If looking at butterfly larvae makes you uncomfortable, please refrain from watching this video.