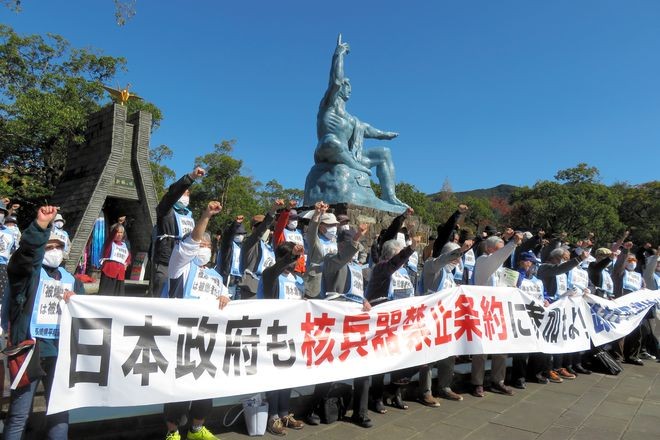 Anti-nuclear demonstrators rally in Nagasaki on Nov. 9. (The Asahi Shimbun)

We cannot help worrying that Japan’s presence as the only nation hit by nuclear weapons seems to be shrinking in the international community.

A Japan-sponsored United Nations draft resolution, calling for the elimination of nuclear weapons, was approved earlier this month by the Disarmament and International Security Committee (The First Committee) of the U.N. General Assembly.

The draft resolution garnered the support of 139 nations, down by nine from last year. There also were 33 abstentions and five votes against--up by seven and one, respectively, from the previous year.

Submitting this motion for the 27th consecutive year, Japan pledged to be a bridge that brings nations together and build a common foundation to realize “a world without nuclear weapons.”

But the number of supporting nations this year was the lowest in 10 years, while the abstentions were the highest.

Last month, Honduras became the 50th country to ratify the Treaty on the Prohibition of Nuclear Weapons--the minimum needed for this comprehensive nuclear ban accord to become a legally binding international law. The accord will take effect in January next year.

Despite this historic development, the draft resolution made no reference whatsoever to the treaty, merely noting to the effect, “We will take note of various approaches toward a world without nuclear weapons.”

As for the part where it mentions “the catastrophic humanitarian consequences that would result from the use of nuclear weapons,” the text expressed “deep concern” until two years ago. But this was replaced last year with a terse “recognizing,” and this was kept in this year’s text.

Also this year, Britain and the United States joined the ranks of co-sponsors of this draft resolution. Some observers say this is why this year’s text reveals far greater consideration for nuclear powers than in any recent year.

Among treaty signatories, 11 nations, including New Zealand, abstained from voting to express their disappointment with the draft resolution.

European nations such as France and Germany, which have military alliances with the United States, also abstained, citing the resolution’s tepidness with regard to the Comprehensive Nuclear Test Ban Treaty (CTBT) that needs to be ratified by the United States and others before it can come into effect.

These abstentions could be interpreted as “protest votes” against the administration of U.S. President Donald Trump, who has beefed up his “America first” nuclear strategy and abandoned all efforts at phased nuclear disarmament.

There is no question about the importance of the Japan-U.S. alliance, but we think our government has a wrong understanding of how Japan needs to present itself to the world as the sole victim of nuclear warfare.

U.S. President-elect Joe Biden intends to resume the policy line of the Barack Obama administration that strove for a “world free of nuclear weapons.” And the Biden White House may well issue a declaration against pre-emptive use of nuclear weapons so long as the United States does not come under nuclear attack.

Japan’s continued obsession with the U.S. nuclear umbrella has already caused the nation to be left behind the trend of global public opinion. Without reconfirming its awareness as a nuclear victim nation and committing itself completely to that identity, Japan will never be able to serve as a bridge between nuclear nations and non-nuclear nations.

For starters, Japan should attend a meeting of treaty signatories as an observer. However, Prime Minister Yoshihide Suga told the Diet, “I will proceed with the utmost caution.”

As for the possibility of inviting a conference of the treaty parties to Hiroshima or Nagasaki, Suga dismissed it out of hand, saying, “That would be inappropriate since Japan is not a signatory.”

The prime minister gave no indication of wanting to change the status quo.

But Japanese citizens, as well as international public opinion, are waiting for Japan to lead the world in its arduous quest for the elimination of nuclear weapons.