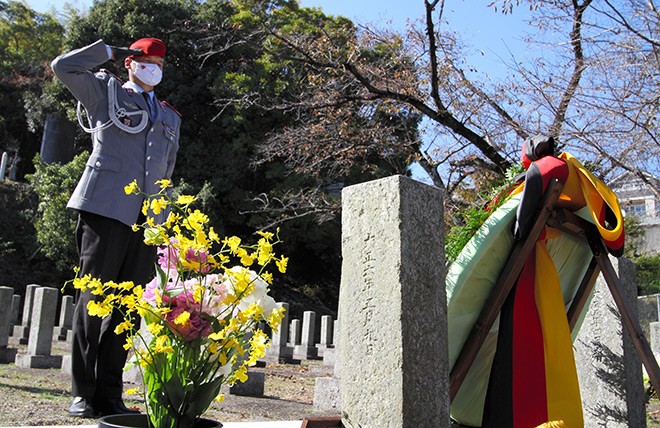 German Col. Karsten Kiesewetter salutes and offers a wreath at his ancestor’s grave in the Sakuragaoka cemetery in Oita on Nov. 13. (Satoshi Juyanagi)

OITA--Karsten Kiesewetter has long been tormented by how his distant ancestor known for his “high-spirited and cheerful” personality wound up dying in a far-off internment camp.

As a child, the German military officer heard that the Imperial Japanese Army took the younger brother of his great-grandfather prisoner during the Siege of Tsingtao in World War I.

One of his family’s keepsakes is a lead cup associated with Julius Paul Kiesewetter.

Karsten began tracing Julius’ footsteps after being stationed at the German Embassy in Japan, determined to once and for all find out “what happened to him and whether he had a grave.”

Karsten, 55, a colonel in the German military, finally made his first official visit to the Sakuragaoka cemetery here, where Julius is buried, on Nov. 13.

Julius, along with another German solider named Richard Klein, were buried more than 100 years ago at the cemetery, formerly used as an Imperial Japanese Army graveyard, after they died from an illness.

Their graves were located with the help of Ryuji Honmyo, 44, a captain in the Maritime Self-Defense Force whom Karsten got to know during a training session, and Miyuki Yasumatsu, 61, a history professor at Beppu University’s faculty of literature, who has studied the German prisoner camp in Oita.

Working with them, Karsten learned how the German soldiers lived in the camp. Records of the death of Julius, who died at age 37 in 1917, and a photo of his funeral organized by friends were also discovered.

The camp stood on the grounds of what is now Kanaike Elementary School from 1914 through 1918, according to Honmyo and other sources.

Prisoners of war there were reportedly allowed to go out for a stroll and hike occasionally.

“I learned they (the German POWs) were treated fairly,” Karsten said. “The Germans appeared to be able to bake bread, and they are said to have given it to children who showed up drawn by its smell.”

Last year, Karsten paid his respects at the cemetery. He was impressed to find that Julius’ grave had been so well-preserved that the deceased’s name inscribed on the surface was legible.

The visit cast a spotlight on a place lost to history, said Eiji Sonoda, 71, vice chairman of the local resident association, which has been cleaning the tombs.

Sonoda accompanied Karsten to the grave with other association members.

“We knew the graves were for non-Japanese citizens, but had no idea about why they were buried here,” Sonoda said. “I'm surprised that our low-key cleaning campaign has led to an international friendship.”

Hideo Suemitsu, 84, head of the federation of associations of bereaved families of the war dead in Oita Prefecture, which is also involved in the graveyard’s maintenance, expressed sympathy for Karsten.

“As a bereaved family member, I can well understand his desire to pay his respects even after a century has passed,” Suemitsu said.

As its name sakura suggests, the Sakuragaoka cemetery is surrounded by cherry trees. Many of the trees are now old.

Renewing their determination to promote friendship and peace for posterity, Karsten and others planted cherry tree seedlings after their visit to the graveyard. The young trees are expected to have small flowers next spring.

“Planting trees represents believing in the future,” Karsten said. “I hope many people will also be able to enjoy beautiful flowers.”