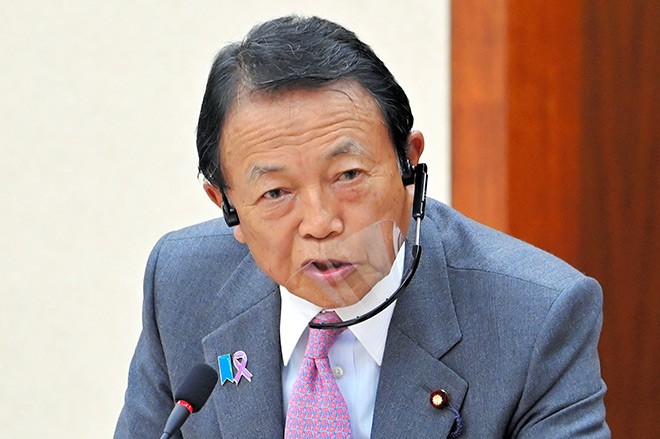 Government officials refused to hand over a document that opposition lawmakers say will clarify the circumstances that led to data falsifications related to a questionable land deal involving the educational institution Moritomo Gakuen.

“We cannot help but believe that the Finance Ministry is only saying things that would be convenient in hiding the evidence,” Yoshinori Suematsu of the opposition Constitutional Democratic Party of Japan (CDP) said at the Nov. 18 Lower House Financial Affairs Committee session.

He asked Finance Minister Taro Aso to release the document.

But Aso only said: “I want to refrain from responding, including on whether the document exists or not. We are a party to a lawsuit so that is the only response I can make now.”

The lawsuit was filed by the widow of Toshio Akagi, an official at the Kinki Local Finance Bureau who committed suicide after becoming despondent about being ordered to fabricate documents related to negotiations of the land deal.

Akagi’s widow filed the lawsuit against the Finance Ministry seeking compensation and an explanation about the document falsification.

During the course of court proceedings, she testified that Akagi’s superior had visited her home and said, “Akagi created a thorough file related to the fabrication.”

In April, 128 opposition lawmakers asked the Lower House investigative bureau to look for the so-called Akagi file to clear up the background to the document falsifications.

They suspect Moritomo Gakuen was given a steep discount for the state-owned land because its leader had close ties with Akie Abe, wife of former Prime Minister Shinzo Abe.

They also believe that Akagi was told to falsify the documents on the negotiations between bureau officials and Moritomo Gakuen to conceal any connections with the former first lady.

But a report submitted on Nov. 9 by the head of the Lower House investigative bureau said Finance Ministry officials have refrained from responding because of the ongoing lawsuit.

The opposition request for the preliminary investigation stems from a comment made by Lower House Speaker Tadamori Oshima in July 2018 regarding the falsification of documents.

However, soon after taking office in September, Prime Minister Yoshihide Suga said at a news conference that he had no intention of re-investigating the document falsification, arguing that the Finance Ministry had already issued disciplinary measures over the matter and prosecutors had concluded their investigation without indictments.

Hiroshi Kawauchi, the CDP lawmaker who has pushed for the preliminary investigation, said: “The Finance Ministry has not released a single document to counter the facts laid out by Akagi’s widow. By responding that it will not reveal whether the Akagi file exists or not, the ministry is, in effect, acknowledging that the document exists.”

(This article was written by Sachiko Miwa and Go Kobayashi.)