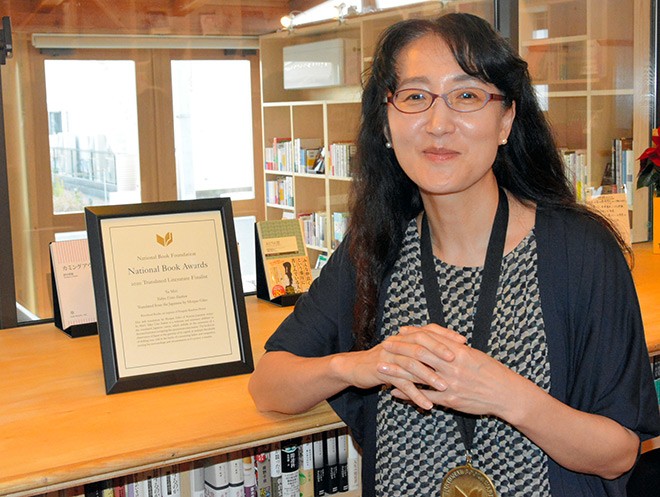 After winning a prestigious U.S. book award for the translated version of her "Tokyo Ueno Station," female novelist Yu Miri gave a shout-out to her adopted "hometown" in Fukushima Prefecture.

“I would like to share such joy with Minami-Soma residents,” Yu said in her speech after winning the U.S. National Book Award for Translated Literature on Nov. 18. “This prize is for all of you.”

In “Tokyo Ueno Station,” translated by Morgan Giles, the protagonist is a man who came to Tokyo from Fukushima Prefecture to earn money in the year prior to the 1964 Tokyo Olympics. He had lost his family in his hometown and became homeless in the capital, living in a makeshift shelter around Ueno Park.

The book was published in Japan in 2014.

“I started writing plays and have consistently written for people who have no place to fit in,” Yu said at an online news conference from Minami-Soma on Nov. 19. “I think it may be a theme that can be shared by readers in other countries.”

Yu, 52, an ethnic Korean resident, was born in 1968. She formed the Seishun Gogatsuto theatrical group and in 1993 received the Kishida Kunio Drama Award for her book “Sakana no Matsuri" (The Fish Festival).

In 1997, her book “Kazoku Shinema" (Family Cinema) won the Akutagawa Prize, one of the most famed literary awards in Japan.

The U.S. National Book Award was established in 1950. Books published by U.S. publishing companies over a one-year period are eligible for the award for translated literature.

Yu's work won the first U.S. National Book Award for a book translated from Japanese to English since “The Emissary,” written by Yoko Tawada, in 2018.