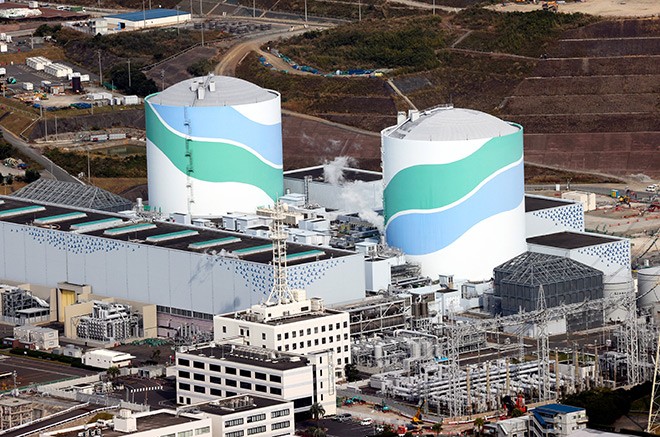 The No. 1 reactor, right, of the Sendai nuclear plant spews steam in Sendai, Kagoshima Prefecture, on Nov. 18 after it was reactivated on Nov. 17. Seen to the left is the No. 2 reactor. (Eiji Hori)

SENDAI, Kagoshima Prefecture--The Sendai nuclear plant’s No. 1 reactor is expected to resume generating power late in the evening of Nov. 19 as the first reactor in Japan outfitted with an anti-terrorism facility.

And a second reactor is soon planned to follow suit.

The No. 1 reactor has been idled since March because the plant operator, Kyushu Electric Power Co., failed to meet the deadline for upgrading the facility under the more stringent reactor safety regulations set after the Fukushima nuclear disaster.

Operators are now required to outfit the plants under an anti-terrorism regulatory “backfit” provision so they can continue to control the reactors remotely even in the event of aircraft crashing into the plant.

In addition, they are obliged to complete the facility upgrades within five years, once their detailed project designs for safeguarding the reactor are approved by the government’s Nuclear Regulation Authority.

The Sendai nuclear plant’s No. 1 reactor became the nation’s first where an operator was forced to halt a reactor due to its failure to meet the latest standards under the retrofit provision.

Kyushu Electric reactivated the No. 1 reactor on Nov. 17 and the following day, the reactor went critical--reaching a point where it can stably generate power.

The reactor is scheduled to go into commercial operation in mid-December.

A similar anti-terrorism facility is expected to be completed for the No. 2 reactor at the same plant in late December. The No. 2 reactor has been shut down since May because the facility’s completion was behind schedule.

The No. 3 and No. 4 reactors at the Takahama nuclear plant in Fukui Prefecture were also forced to suspend operations, as the facilities failed to finish meeting the requirements within the five-year time limit.