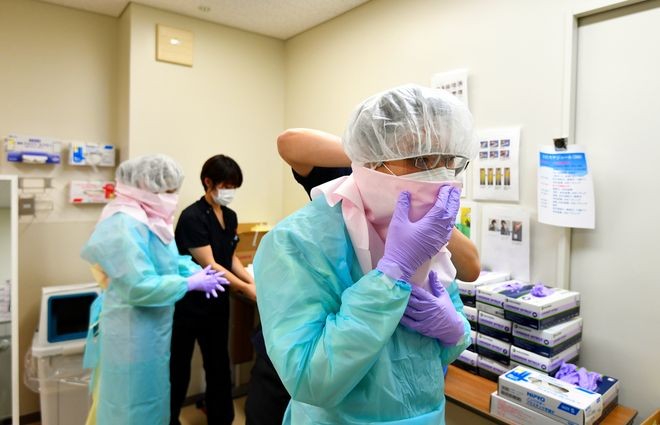 A family of a man in his 20s who contracted the new coronavirus in March found him lying on the floor unconscious, convulsing and vomiting.

The man, who lives in Yamanashi Prefecture, was taken to the University of Yamanashi Hospital by ambulance. The cerebrospinal fluid around the brain was analyzed with a polymerase chain reaction (PCR) examination, testing positive.

He apparently had developed meningitis, in which meninges between the skull and brain are inflamed. An MRI brain scan spotted inflammation in the hippocampus, a section responsible for memories.

After he was discharged from the medical center, the individual reportedly could not clearly remember things that had occurred over the past few years, although that does not significantly interfere with his daily life.

The memory problem is suspected to be linked to the coronavirus infection, but the detailed cause has yet to be confirmed.

The man's case is among a succession of reports from around the world that the novel coronavirus has invaded the brain of some patients and “possibly caused serious cerebral damage.”

In those cases, patients were suffering from memory impairment as well as meningitis, brain inflammation and disturbance of consciousness, raising concerns about the aftereffects of COVID-19.

Experts are now moving to identify the mechanism of the virus’ infection leading to brain lesions.

REPORTS POPPING UP AROUND WORLD

In Britain, a 59-year-old woman experienced a disturbance of consciousness after complaining of a fever and headache, and was diagnosed as being affected by the virus after hospitalization.

The results of her MRI scan revealed that her brain suffered swelling and bleeding, defining the patient’s symptom as acute necrotizing encephalopathy. She was placed in intensive care but died on the 10th day of her hospitalization.

A paper released by a British team in July shows similar results: Of 43 confirmed or suspected COVID-19 patients, delirium and other brain dysfunctions were detected in 10, brain inflammation in 12, and cerebral strokes in eight.

According to experts, viruses could affect cerebral cells in two ways: going through olfactory nerves and blood vessels to reach brain cells; or invading other organs to exert influence on the head.

If the former is the case for COVID-19, viruses proliferate in the brain and lead to inflammation to cause damage to the central nerve in the brain.

Under the latter theory, other organs are infected so an excessive immune response known as a cytokine storm emerges, resulting in inflammation in the entire body and damage to the brain’s central nervous system.

Satoshi Kamei, director of the nerve infectious disease center of the Ageo Central General Hospital, who is knowledgeable about brain inflammation, said the “cytokine storm theory can explain cerebral conditions (deriving from COVID-19 infection) better than the direct infection argument.”

EFFECTS ON BRAIN MAY BE ‘UNAVOIDABLE’

In the meantime, evidence has also been found suggesting that the novel coronavirus directly reaches the brain.

A team including Akiko Iwasaki, a medicine professor at Yale University, announced in September in its thesis that it confirmed nerve cells could be infected with the virus, using a tiny volume of cerebral tissue made of neurons derived from human induced pluripotent stem (iPS) cells.

It was also revealed that the virus proliferates in infected cells to deprive surrounding cells of oxygen, killing tissue around the infected area.

Back in Japan, Hideyuki Okano, a physiology professor at Keio University, and his colleagues are researching the new type of coronavirus by creating nerve cells from iPS cells as well.

“Using iPS cells, it is possible to check through an experiment how the new coronavirus affects the nerve system in vitro,” said Okano.

Fumihiro Taguchi, a former senior official at the National Institute of Infectious Diseases, pointed out that it is “still difficult to determine the mechanism of the virus impacting the brain.”

According to Taguchi, the entire body has already been affected by the virus by the time its effects on the brain are discovered, often rendering it impossible to confirm the route of infection.

“No matter what mechanism the virus uses, its effect on the brain might be unavoidable,” Taguchi said. “The important thing is that people should take precautions to reduce the risk of infection as much as possible.”