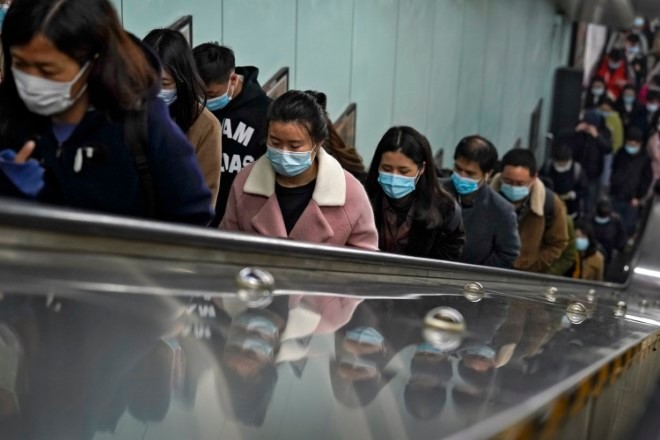 Commuters wearing face masks to help curb the spread of the coronavirus are reflected on a panel they ride an escalator at a subway station during the morning rush hour in Beijing on Nov. 17. (AP Photo)

BEIJING--Nearly one million people have taken an experimental coronavirus vaccine developed by China National Pharmaceutical Group (Sinopharm) through the country’s emergency use program, the firm said late on Wednesday.

China launched the emergency use program in July, which so far includes three vaccine candidates for essential workers and other limited groups of people even as clinical studies have yet to be completed to prove their safety and efficacy.

No serious adverse reaction has been reported from those who received the vaccine in emergency use, Sinopharm said in an article on social media WeChat, citing Chairman Liu Jingzhen from a recent media interview.

It’s unclear which vaccine Liu referred to, and Sinopharm was not immediately available to comment.

The experimental vaccines are undergoing Phase 3 clinical trials overseas that have recruited nearly 60,000 people, and blood samples of more than 40,000 participants have been taken 14 days after they took the second dose, the article said citing Liu, without breaking down the numbers for each vaccine.

Among construction project employees, diplomats and students who went abroad after taking Sinopharm’s vaccine, no one has been infected, it added.

But experts have cautioned against using data solely from emergency use program, without comparable results from a clinical trial-standard control group, to determine a vaccine’s effectiveness.