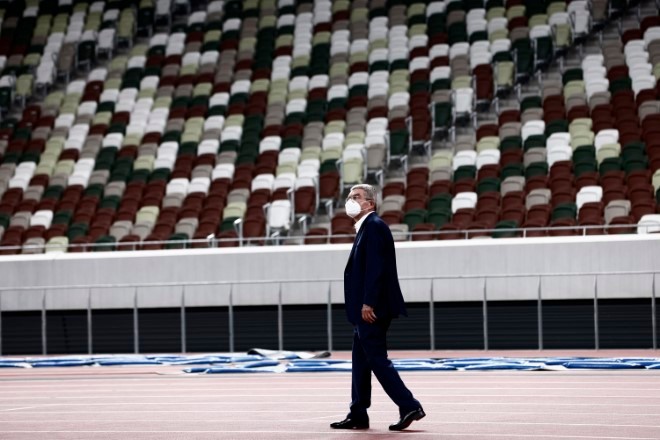 IOC President Thomas Bach visits the National Stadium, the main venue for the 2020 Olympic and Paralympic Games postponed until July 2021 due to the coronavirus pandemic, in Tokyo on Nov. 17. (AP Photo)

We’re at the halfway point. The Tokyo Olympics were postponed eight months ago, and now are to open in eight months: July 23, 2021. Crunch time is coming.

Tokyo organizers and International Olympic Committee President Thomas Bach have spoken vaguely about how the Games can take place in the midst of a pandemic. Plans and dozens of “scenarios” have been drawn up about COVID-19 countermeasures: possible quarantines, vaccines, safe distancing, and making the Athletes’ Village a safe “bubble environment.”

These ideas will have to become concrete solutions beginning next month and into early 2021.

Hanging in the balance are 11,000 Olympic athletes and 4,400 Paralympians. The IOC depends on these Games since 91 percent of its revenue if from selling TV rights and sponsorships.

Here are some questions and answers about where the Olympics stand on several fronts.

Q: Bach was in Tokyo this week and said vaccines and rapid testing are on the horizon, which Bach believes will make it much easier to hold the Games. Will athletes be required to take a vaccine to compete?

A: Bach says “no.” But athletes and any official or fan going to Japan will be under pressure to get vaccinated. Officials are suggesting athletes will not face a 14-day quarantine after entering Japan.

IOC Vice President John Coates said the IOC and national Olympic committees will be looking for “role models” among athletes to encourage vaccination. Bach says healthcare workers are a priority for the vaccine ahead of athletes. IOC officials have also suggested vaguely that the Switzerland-based body will pick up some of the vaccination costs. As is often the case, there has been nothing specific.

Q: Will fans be allowed into venues?

A: We still don’t know. Bach says he expects a “reasonable” number of fans to be able to attend events. There is still no decision announced on allowing thousands of fans from abroad to attend. There is the health issue. But there is also pressure on the operating budget to allow as many fans as possible. The budget foresees $800 million in revenue from ticket sales--the third largest income item. Japan has been successful holding sports events with some fans, at times at the 70-80 percent capacity level.

Q: How many athletes have already qualified for the Olympics.

A: Officials say 57 percent of the slots are full. So many have not yet qualified, and many qualifying events have been scrapped by the pandemic. It’s clear athletes in some countries have a better chance to train than others. This could leave an uneven playing field and could also force some slots in the Olympics to be awarded without a traditional qualifying event. This is part of the “collateral damage” to the Olympics from the pandemic.

Q: Who is paying for the delay and the rising costs?

A: The IOC, organizers, and local politicians seldom talk about the costs. Japan says it’s officially spending $12.6 billion to organize the Olympics. But a government audit last year said it was twice that. All but $5.6 billion is public money. Over and above this, the delay is reported in Japan to cost $2 billion to $3 billion. No one in authority has offered an official number. The IOC has said it will chip in about $650 million toward the delay but has given few specifics.

A University of Oxford study says these are the most expensive Summer Olympics on record.

Organizers recently announced they found simplification savings of about $280 million--about 2 percent of the official outlays. Tokyo said the Olympics would cost $7.3 billion when it was awarded the games in Buenos Aires, Argentina, in 2013.

A: Better than most places, but infection cases are rising. About 2,000 people are reported to have died from COVID-19 in Japan, in a population about 125 million. New cases in Tokyo on Thursday topped 500 for the first time. Prime Minister Yoshihide Suga says the country is on “maximum alert.” This surge is not likely to convince an already skeptical population that the Olympics are a safe and sensible idea.

Q: I have read these are the best prepared Olympics in history. It his true?

A: Bach has repeatedly said this, and he has lauded organizers for their ability to quickly adapt during the pandemic. Few countries could handle the postponement as well as Japan has.

It’s ironic, therefore, that Tokyo has also been the subject of a probe by French investigators relating to alleged bribery during the bidding for these games. Bach was asked this week in Tokyo about reported payments of $8 million made by the Tokyo bid committee to Haruyuki Takahashi.

Takahashi is a former executive of the Japanese marketing company Dentsu Inc., the marketing agent for Tokyo 2020. He is reported to have lobbied IOC members for votes.

“With regard to Mr. Takahashi, we received confirmation that there was no infringement of the IOC rules,” Bach said this week when asked.

Former Japanese Olympic Committee President Tsunekazu Takeda was forced to resign last year after acknowledging he signed off on a $2 million payment to a Singapore-based consulting company for bid work. He denied any wrongdoing.