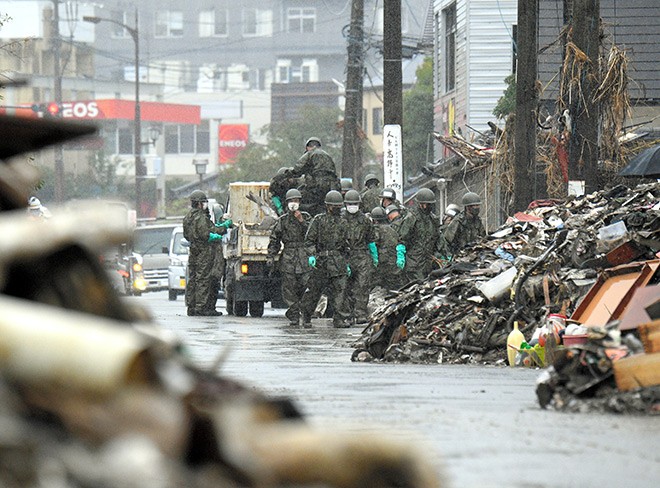 Self-Defense Forces personnel load debris piled up on the road of Hitoyoshi, Kumamoto Prefecture, onto a truck in July after the area was flooded following torrential rain. (Asahi Shimbun file photo)

Record heat waves, massive wildfires and destruction from hurricanes are upending people's lives worldwide, a resolution declaring a “climate emergency” notes, which was adopted in the Lower House on Nov. 19.

The Lower House adopted the resolution amid a series of domestic meteorological disasters to show Japan's resolve to address global warming.

Passed at a Lower House plenary session, the resolution aims to spur citizens, businesses and local governments to take action to help stop global warming by raising awareness of the issue.

The resolution was drafted by a cross-party group of lawmakers, including those from the ruling Liberal Democratic Party, its junior coalition partner, Komeito, and the opposition Japanese Communist Party.

It warns that typhoons and torrential rains thought to only occur once in several decades are now hitting Japan almost every year, inflicting severe damage on various parts of the country.

“Global warming issues are beyond the scope of climate change and becoming a climate crisis,” the resolution states, which set a goal of realizing a decarbonized society as soon as possible and expressed determination to have the whole country work toward rebuilding economic and social systems and strengthening measures against global warming.

The Upper House also adopted a similar resolution at a Nov. 20 plenary session.