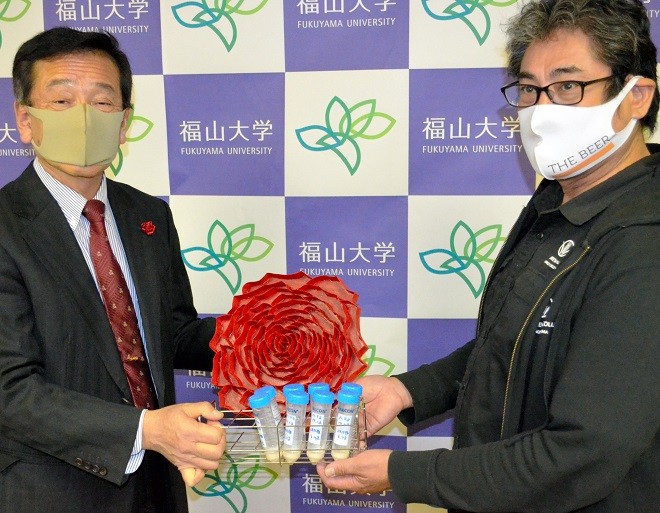 FUKUYAMA, Hiroshima Prefecture—This city’s official flower is being used in a different type of floral arrangement.

A brewery near JR Fukuyama Station on Nov. 5 began creating a craft beer fermented with yeast taken from a rose blooming in Fukuyama. The mashing process is part of the city’s efforts to promote itself with the flower.

The rose yeast was developed by Taisuke Hisatomi, 63, a professor at Fukuyama University’s Faculty of Life Science and Biotechnology who specializes in microbiology.

Hisatomi handed over the yeast to Shoji Kobatake, 49, who operates the brewery, at the university on Nov. 4.

The rose yeast is the brainchild of an industry-government-academia joint project that started in 2013. The yeast has been commercialized for wine production and as a bread leavening. It will also be used for sake brewing, the professor added.

Project team members extracted about 1,300 yeast strains from 50 rose varieties grown at the city-run horticulture center. They analyzed the DNA of eight strains with high leavening power to confirm safety before deciding to use a red rose cultivar called Mr. Lincoln.

“It can ferment the malt well enough to produce alcohol,” Hisatomi said. “We believe we can make a great beer.”

Fukuyama University provides the yeast as a research product for a fee.

Kobatake’s Bingo Fukuyama Brewing College microbrewery, housed in a building in the Fushimicho district, also offers training and tours. Its beverages are classified into the low-malt “happoshu” category.

“I want to create a craft beer that allows patrons to enjoy the yeast flavor to the fullest,” Kobatake said. “I hope it attracts people into Fukuyama.”

About 400 330-milliliter bottles of the floral beer are expected to be produced.

The beer will be on sale from Dec. 10 at a shop attached to the brewery.