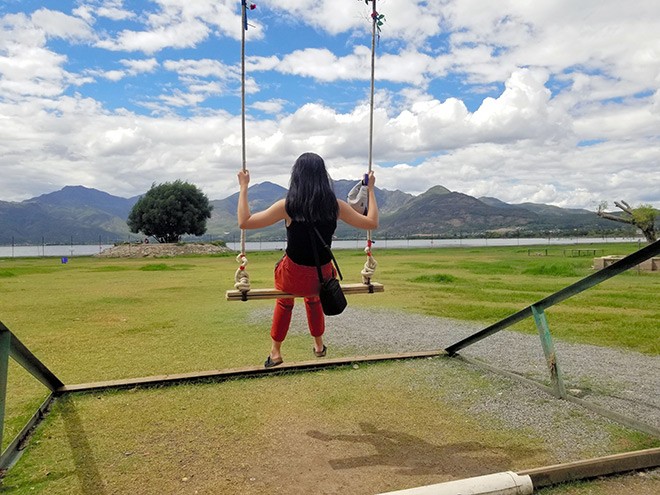 An American woman has filed a sexual misconduct lawsuit against the Nagasaki prefectural government. (Provided by the plaintiff)

NAGASAKI--A young woman living in the American Midwest remains livid over what was supposed to be a dream adventure in Japan.

“My motivation was to challenge myself to live in a country where I didn’t speak the language and work in a new profession,” she said.

She applied for the prestigious Japan Exchange and Teaching Program (JET) that invites young college graduates from around the world to teach English at schools in Japan through a collaboration with ministries and local governments.

Her application was accepted, and she landed an assistant language teacher (ALT) job in Nagasaki Prefecture. After graduating from university, she arrived in Japan in July 2016.

But she said her otherwise invaluable two-year experience in the southern prefecture was marred by sexual harassment and indifference toward her plight by the prefectural education board.

A little more than two years have passed since she completed the program and left Japan in July 2018.

Inspired by the recent worldwide “MeToo” movement, the woman, now 26, has filed a lawsuit against the prefectural government, demanding damages for emotional distress.

The first incident occurred on an evening of mid-October in 2016, a few months after she started working as an ALT in Nagasaki Prefecture.

According to her lawsuit, the woman attended a drinking party with teachers and staff of a prefectural special-needs school where she taught English one day a week.

The vice principal of the school at the time attended the party.

Several of the party attendees, including the woman and the vice principal, decided to go to a karaoke parlor afterward.

After the second-round party kicked off, the vice principal moved really close to the woman and started singing to her in a loud voice.

His actions made her and at least one other teacher feel uncomfortable. One Japanese English teacher could not watch any longer and told the vice principal to back off.

The vice principal finished the song, then asked the American woman in English, “Do you want to come home with me?”

According to her lawsuit, such a phrase in English is typically used as a sexual advance.

The woman felt she was being sexually harassed by him and felt extremely uncomfortable. The other teacher reproached the vice principal for being super drunk, and he eventually left the karaoke place.

The woman later reported the incident to her superior at a prefectural high school where she normally worked as an ALT. The superior then sent the issue to the Japanese English teacher who was at the karaoke place and had scolded the vice principal.

But instead of seeking punishment against the vice principal, the teacher advised the American woman, “Next time, if you ever attend a party, you should sit as far away as possible from the vice principal and avoid him.”

The teacher also told the woman that she “will not have to attend drinking parties from now on.”

The vice principal was never subjected to disciplinary action.

The woman said that every time she was in the same room with the vice principal, she became nervous and fearful about what he might say to her.

Also, it was practically impossible to “avoid” him in the faculty room.

She said her worries about him prevented her from attending social gatherings and deprived her of an opportunity to get to know her colleagues.

The stress became so unbearable that in November 2017 she asked the prefectural education board to transfer her from the special-needs school. But her request was denied.

She felt that “there was no support from the board,” according to the lawsuit.

The second incident was even more troubling.

In March 2018, the woman visited the home of a male ALT, who had been assigned to work at a different prefectural high school in Nagasaki Prefecture. The purpose of the visit was to practice a song that they were scheduled to perform at a school event.

When the practice was over and she was about to leave, the man forced a kiss on her neck and tried to kiss her mouth. She dodged the attempt, but he lifted her up in his arms, pushed her back on a bed and kissed her on her neck.

The woman fought him off and left his place. She said she feared the man would rape her.

But she said the counselor told her: “It’s not our job but the police’s job. … The incident occurred outside the school, so I can’t do anything.”

The woman said a female police officer who spoke English told her that she could not file a victim’s report because she was not injured, was leaving Japan soon, and there was not enough evidence.

An intermediary organization and others told her to take up the issue with the prefectural education board.

The board interviewed both the woman and the male ALT and concluded that what happened to her was sexual harassment.

He received a strong warning from his school’s principal, but nothing else.

“He was a good friend and I trusted him,” she said of the male ALT. “What happened to me was sexual assault, not sexual harassment. When I left the house, I was shaking.”

Her lawsuit states that the punishment was not severe enough and the board’s decision “lacked compassion for a safe and secure work environment.”

She also said the board is supposed to administer harsher penalties if a teaching staff member commits an obscene act or sexual harassment against a non-student.

The woman, who currently lives in the U.S. Midwest, filed the damages lawsuit at the Nagasaki District Court on Aug. 31, demanding 2 million yen ($19,275) in compensation from the prefectural government.

At the first hearing on Oct. 21, the prefectural government asked for a dismissal of the lawsuit with prejudice, saying it had no merit.

The woman told The Asahi Shimbun that the recent #MeToo movement gave her a supportive push to take legal action after more than two years had passed.

“People have stood up and more people are listening. Sexual assault is taken more seriously. It is nice to see that,” she said.

While she was still in Japan, a Japanese-American acquaintance told her, “It might be taken as insulting to speak up because you are a foreigner and a woman.”

But witnessing many women speaking out and sharing their traumatic experiences in pursuit of justice and change has given her courage, she said.

The woman is an American of Asian descent.

Living abroad was not much of a challenge to her because she had studied in Spain while in high school and later in China.

But going to Japan on the JET program was something special because, unlike her previous study abroad experiences, she had not studied the Japanese language and “had no prior knowledge,” she said.

Her Japanese history teacher, who was a former JET participant himself, recommended that she apply for one of the largest international exchange programs.

The JET program is administered through the collaboration of the internal affairs ministry, the Foreign Ministry, the education ministry and the Council of Local Authorities for International Relations (CLAIR), among others.

More than 70,000 people from 75 countries have participated in the program during its 34-year history, according to its website.

The size and prestige of the JET program have made the sexual misconduct incidents weigh heavier on the woman’s mind, she said.

A female Nagasaki prefectural assembly member who had learned about the incidents questioned education board officials after the woman left Japan.

An education board official said at a prefectural assembly session in 2018 that the male ALT was not subjected to disciplinary penalties because he did not assault nor threaten her and stopped his action once he realized it was not consensual.

“My rejection was clear when I moved my face away from him,” the woman said. “I don’t understand why he can get away by just being scolded when he is in a position to teach adolescents. I felt abandoned, hopeless, and scared.”

She said the incident involving the vice principal was also very shocking.

“I know that sexual violence occurs not only in Japan,” she stressed. “I like Japan, and it would be nice to visit again. But I would not work there again.”