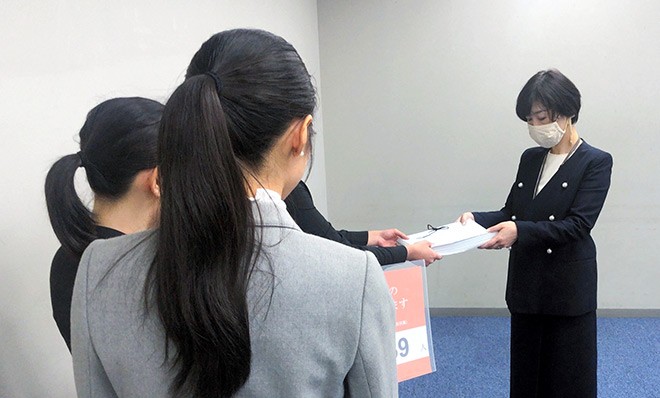 Members of Your Voice Matters, a group of university students, present their petition to Shinobu Okada, a Justice Ministry official, on Nov. 29. (Azusa Mishima)

A group of university students submitted a petition to the Justice Ministry on Nov. 20 requesting that the age of consent be raised from the current 13 to 16.

The group called Your Voice Matters started a petition drive over the internet and collected about 40,000 signatures. The petition and request was addressed to Justice Minister Yoko Kamikawa.

A 21-year-old senior at Kwansei Gakuin University in Hyogo Prefecture who is a member of the group said she had not realized the age of consent was set so low until she began studying the issue in university.

“I was very surprised,” she recalled. “There were many people who signed the petition who also said they first realized what the consent age was through this effort.

“It is important to raise the age of consent in order to protect minors who are still immature physically and psychologically from sex crimes in light of the fact sexual intercourse is not taught during compulsory education.”

Anyone having sex with a minor under 13 can be arrested for statutory rape under the Criminal Law, but charging someone with sex crimes for having intercourse with a person over the age of 13 requires proof of violent action or threats.

Moreover, the victim must explain the extent to which they resisted in order to bring a charge of sexual assault.

The request submitted by the students’ group explained that 13 was a low age from an international perspective and asked that it be raised to 16 when many children will have graduated from junior high school.

The petition stated that current curriculum guidelines for junior high school do not call for teaching about sexual intercourse, meaning students may not be fully informed about what constitutes sexual assault.

(This article was written by Aya Shioiri and Azusa Mishima.)