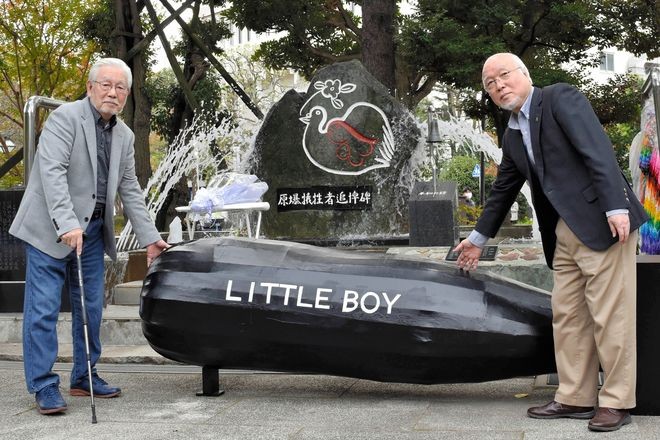 Hiroshi Yamamoto, left, takes possession of a full-scale model of the Hiroshima atomic bomb from Takeshi Minato, right, in front of a cenotaph for atomic bomb victims at Takino Koen park in Tokyo’s Edogawa Ward on Nov. 1. (Noriyasu Nukui)

The lives of two atomic bombing survivors have become unexpectedly linked through the rescue of a life-size model of the bomb dropped on Hiroshima that was bound for the junkyard.

When Hiroshi Yamamoto, 82, learned it was to be tossed out, he was floored and instantly decided he had to save it.

"All atomic bomb survivors like us will disappear soon," Yamamoto said. "I don’t think there will be another person who will take the trouble and spend the money to make full-size models."

Yamamoto was exposed to the radiation from the atomic bombing of Hiroshima on Aug. 6, 1945, when he was in the second grade.

He was on his way to school with his friends when he lost consciousness from the flash and blast, some 2.5 kilometers from its hypocenter. When he awoke, he found it was already getting dark, and he was covered in blood.

The back of his head was burned, and his hair didn't grow back until he went to junior high school. He still has keloid scars on his arms.

It has been difficult for him to share that story.

For a long time, Yamamoto turned his back on his war experiences. He avoided media reports on anniversaries of the Battle of Okinawa, the atomic bombings of Hiroshima and Nagasaki, Japan's defeat in World War II and other war-related topics that crop up every summer.

"I changed the channel the moment I saw them and kept turning my eyes away," he recalled. "There were no such words back then, but I think I have PTSD (post-traumatic stress disorder)."

His wife, Kazuko, passed away a few years ago. She was also a Hiroshima hibakusha, but they never talked about their experiences with each other.

He finally could grapple with his feelings as he sorted through his wife's notes and other personal items after her death.

Now he is the head of an atomic bomb survivor group in Tokyo's Edogawa Ward known as Shinkokai.

While sharing his stories still gives him nightmares, Yamamoto now finds it important to speak with schoolchildren about his experiences. The life-size model could prove a valuable tool for those kinds of events.

That’s what Yoshinao Fukuchi envisioned when he created it. The fellow hibakusha thought crafting it would bring history to life and convey the horror of the bombing at a single glance.

Fukuchi was 14 when he was exposed to radiation from the bomb dropped on Hiroshima and was only about 1 km from the hypocenter.

He moved to Tokyo after the war and operated a variety shop in Sumida Ward.

But he had wanted to find a way to impart the history of the bombing to people, so he opened a private exhibition room in a warehouse adjacent to the store where he could showcase documents and other related historical materials.

Fukuchi particularly cared about realistic, life-size models of the atomic bombs--known as "Little Boy" and "Fat Man," which were dropped on Hiroshima and Nagasaki--that could create a visual representation of the bombs

About two decades ago, he crafted two models to scale, with the help of an ironmonger and other supporters in the ward.

Using various historical documents, they created models of the Hiroshima and Nagasaki bombs, with a metal frame covered by cloth sheets.

They became well known after being displayed at peace rallies in Tokyo and other atomic bomb-related exhibitions.

But Fukuchi died in 2005 at age 74 and the exhibition room closed.

A local Sumida Ward committee, comprised of members of a hibakusha group and other local organizations, which organizes photo exhibitions on peace and the atomic bombings, came into possession of the two models.

But, despite its best efforts, it couldn't find a place to store them after fall, forcing it to consider disposal.

Fukuchi’s wife, Shihoko, said she was also prepared to see the models scrapped.

But Yamamoto was luckily able to save one of the models after getting in touch with them.

He arranged so that Shinkokai will keep the model of the Hiroshima bomb, which is 3.12 meters long and 75 centimeters in diameter.

They held a handover ceremony on Nov. 1, signifying a passing down of the torch. It was held at Takino Koen park in Edogawa Ward, home to a cenotaph dedicated to atomic bomb victims and a monument embedded with blast-exposed tiles donated from Hiroshima and Nagasaki.

"I feel the responsibility of taking it over and passing down its legacy," Yamamoto said.

But the fate of the model of the Nagasaki bomb replica remains uncertain because it measures 1.5 meters in diameter--nearly twice that of the Hiroshima bomb model, making it tougher to move and house.

The committee is currently seeking any groups willing to take possession of and look after the model.