A macaque mother with the transplanted uterus succeeds in giving birth to a baby. (Provided by Shiga University of Medical Science) 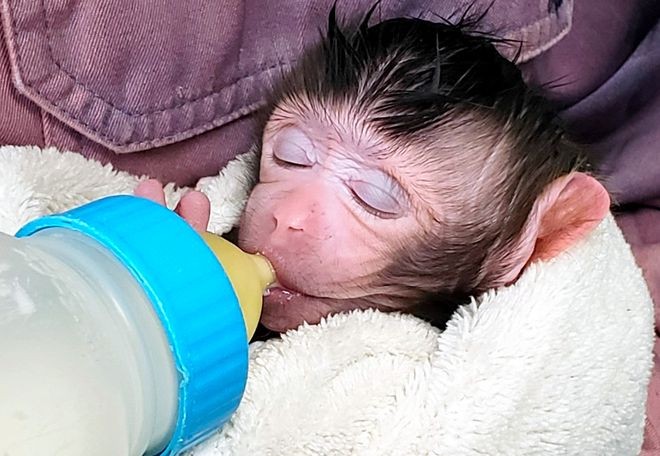 Japanese scientists succeeded in giving birth to a macaque baby from the mother’s transplanted uterus, the first such achievement in the world.

A team of researchers including those from Keio University and Shiga University of Medical Science said the newborn, delivered in May, has grown healthily.

They expect their procedure to be applied to human patients in the future.

“The species close to mankind successfully became pregnant and had a baby, so there are no technical problems with our method,” said Iori Kisu, an assistant professor of gynecology at Keio University, who is a team member. “We believe the success marked a huge step toward clinical applications.”

Deliveries of human babies have never been carried out in Japan following human-to-human womb transplantation, according to the scientists, although nearly 40 births associated with grafted uteruses have been reported in other parts of the world.

The team removed the womb of a female crab-eating macaque, and then transplanted the organ from another monkey to the mother. While using an immunosuppressive drug, the researchers brought an egg fertilized in vitro into her uterus to produce the offspring.

Excising the womb in preparation for transplantation requires advanced skills, such as not damaging thick blood vessels around the uterus, so the grafted organ can work properly.

With an eye on applications for women, the team has been researching macaques. It transplanted the uterus to the monkey in 2017, which became pregnant in 2018 but suffered a miscarriage on two occasions.

In the third round of the attempt, the fetus’ healthy growth was confirmed in December 2019, and the mother macaque underwent a caesarean section to deliver the baby.

The team’s results were published in the international medical magazine Journal of Clinical Medicine in November.

In 2018, Keio University submitted a draft clinical application plan to the Japan Society of Obstetrics and Gynecology and the Japan Society for Transplantation. This was aimed at transplanting uteruses to one in 4,500 women, who do not have a womb from birth due to a condition known as Rokitansky syndrome.

The Japanese Association of Medical Sciences, the nation’s largest medical body, has been considering ethical and other issues over the topic since 2019, and the team is now awaiting the association’s conclusion.