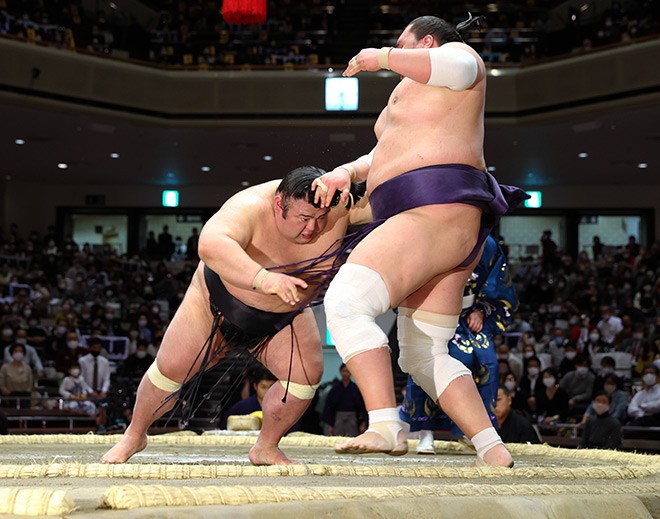 Ozeki Takakeisho powered through komusubi Terunofuji in a playoff on the final day of the November Grand Sumo Tournament on Nov. 22 to win his first Emperor’s Cup at the sport's second-highest rank.

Terunofuji forced the playoff with a convincing and hard-fought win over Takakeisho in the day’s final bout at Ryogoku Kokugikan in Tokyo. That left both wrestlers with 13-2 records.

But Takakeisho regained his powerful pushing-and-thrusting style as he faced off against Terunofuji in the playoff bout and quickly drove his Mongolian rival out of the dohyo.

Terunofuji was seeking to win his second tournament this year as he continues a remarkable comeback after having once reached ozeki before plunging to the second-lowest jonidan division due to injuries.

The only other time Takakeisho won a tournament was two years ago when he was still a komusubi.

He fulfilled his responsibility as the highest-ranked wrestler in this tournament as the two yokozuna sat out from the start and his two fellow ozeki also were forced to the sidelines with injuries during the course of the 15-day basho, the final of the year.

Takakeisho will be in line for promotion to yokozuna should he win the New Year Grand Sumo Tournament set for Tokyo in January. Sumo regulations state that an ozeki who wins two consecutive tournaments can be promoted to the highest rank.