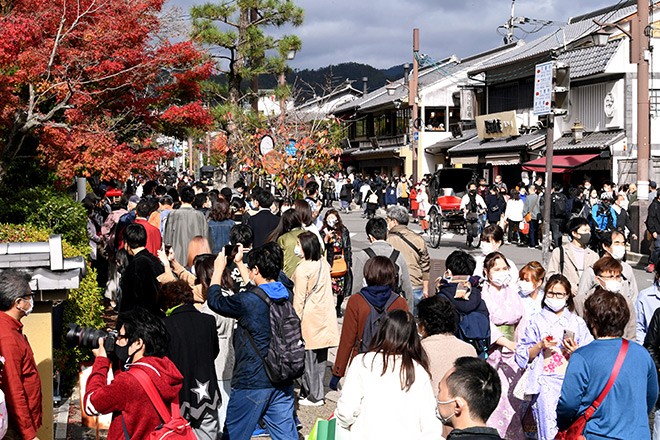 Some perennially popular tourist spots were teeming with out-of-towners Nov. 21, the first day of a three-day weekend, despite an alarming spike in new coronavirus infections. But in Tokyo and elsewhere, crowds were much thinner than usual.

Leafy and mountainous Hakone in Kanagawa Prefecture and Arashiyama, a nationally designated historic site and place of scenic beauty in Kyoto Prefecture, reported two- and four-fold increases in visitors, respectively, compared with the holiday average before the crisis.

However, the northernmost main island of Hokkaido, where novel coronavirus infections have surged in recent weeks, along with major train stations in large cities, were spared a massive influx of visitors.

Estimates of people traveling were provided by Agoop Corp., a Softbank Corp. subsidiary that utilizes positional information on smartphone users.

Agoop's data showed that the number of visitors to Hakone-Yumoto, a gateway to the Hakone hot spring resort, rose by 95.6 percent during the course of an hour from 3 p.m. on Nov. 21, compared with the same period on holiday averages between Jan. 18 and Feb. 14.

The Arashiyama district, a renowned tourist destination in Kyoto, registered an increase of 280.4 percent.

Compared with the holiday average in November 2019, when the disease was still unknown, Hakone-Yumoto had a 43.4-percent rise in visitors and Arashiyama an increase of 11.1 percent.

Prior to the three-day holiday period, the Japan Medical Association urged the public to refrain from going out due to spikes in case counts in many parts of the country.

The government, alarmed by the surge of new cases, said Nov. 21 it will partially review its “Go To Travel” campaign, a program that subsidizes travel costs to shore up the tourism industry ravaged by the pandemic.

Those move prompted a flurry of cancellations of reservations for hotel rooms in popular tourist areas and smaller crowds than usual at major train stations near shopping or entertainment districts.

For example, Shibuya Center-Gai, the central hub for youth culture in Tokyo’s Shibuya Ward, reported a visitor decline of 29.7 percent. At Motomachi-Chukagai Station in Yokohama, the decrease came to 12.8 percent, while Sakae Station in Nagoya logged a drop of 19.8 percent.

Nanba Station in Osaka and Tenjin Station in Fukuoka logged drops of 13.9 percent and 22.4 percent, respectively.

Naha Airport Station, a monorail stop in the Okinawa prefectural capital, witnessed a drop of 22.1 percent.