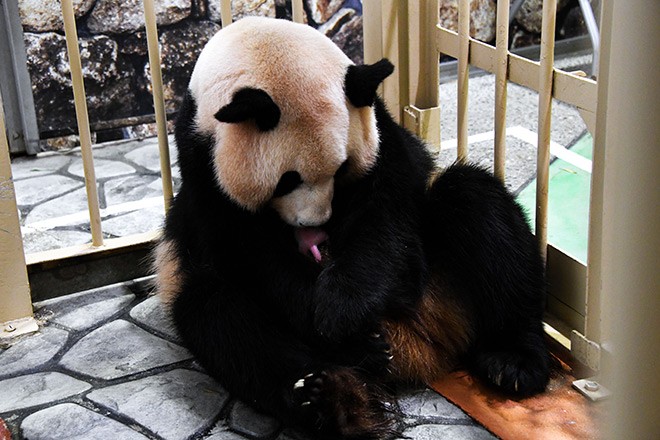 SHIRAHAMA, Wakayama Prefecture--A zoo here announced the birth of a giant panda fathered by a 28-year-old, long the world's reigning champion to breed in captivity.

It was the first giant panda birth at the zoo in two years and the 17th to date.

Eimei, which became the oldest giant panda in captivity to reproduce through natural breeding in 2014, has been extending his record. By November last year, 22 grandchildren and three great-grandchilden had been born.

The newborn, the 10th Rauhin has given birth to, is the first male cub at the popular Wakayama zoo in 10 years. For Eimei, the cub is his 16th.

Tatsuko Nakao, the zoo’s vice director and veteran panda keeper, was overjoyed by the news and declared Rauhin had given birth to “a healthy boy.”

“He's so healthy, Rauhin has to hold him tight. Otherwise, he might jump out of his mother’s clasp,” Nakao said.

Zoo staff confirmed that natural mating occurred between the two pandas in June, with Rauhin showing signs of pregnancy in late October.

The zoo had kept her away from public view since then, anticipating a birth at any time.

Staff will decide when to make the mother and cub available for public viewing, depending on their progress.

Adventure World has been working with China to breed pandas in captivity. Once they are fully grown, they will journey to China for breeding.

In past deliveries, China dispatched staff to the zoo to assist in the process.

This time, however, such support was not available due to the novel coronavirus pandemic.

The zoo said its staff received advice online from China and attended to the delivery by themselves for the first time.