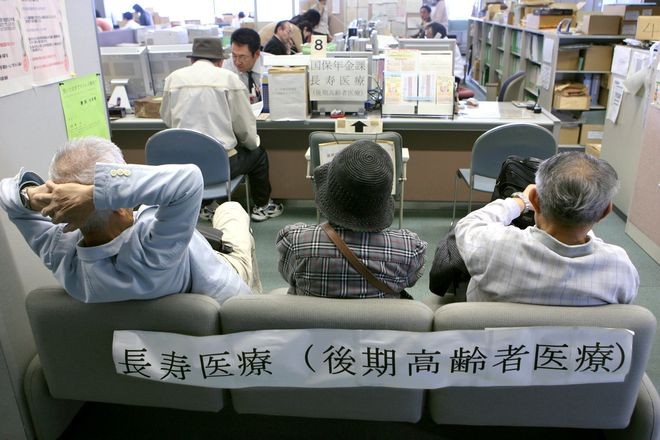 The medical consultation desk for elderly people aged 75 or older at the Bunkyo Ward office is busy on the morning of April 15, 2008. (Asahi Shimbun file photo)

Elderly Japanese aged 75 or older, in principle, pay 10 percent of their health care costs out of pocket.

The government is working on a reform to require some of them to shoulder 20 percent of the costs as a key ingredient of the envisioned social security system to ensure benefits for all generations.

The central question is how many of the elderly population--and who--should make larger out-of-pocket payments for the health care services they receive. The decision is about to be made.

The nation’s aging population and low birthrate makes it inevitable that older people are asked to make a greater contribution to the safety net if they can afford to do so.

But most people in this age group are trying to make ends meet on their modest pension benefits. No increase in their social security burden should limit their access to necessary health care.

The challenge for policymakers is striking a good balance between the financing needs of social security and the health care needs of the elderly to ensure a smooth and reasonable reform.

The decision should be made with great care and based on the realities of health care services provided to elderly patients and expected impacts on their family finances.

Currently, Japanese under 70 pay 30 percent of their medical costs with their own money, while those aged 70-74 pony up 20 percent of the amount. People aged 75 or older are required to cover 10 percent.

People who belong to the oldest age group are still required to plunk down 30 percent if they earn as much as members of the working-age population. But such senior citizens with money to spend account for only 7 percent of the group. More than 90 percent fall in the 10 percent category.

Half of the health care costs for people aged 75 or older excluding the amount covered by their out-of-pocket payments are financed by taxes. Financial contributions from health insurance associations for employees cover 40 percent of the expenses while public health insurance premiums paid by elderly people provide the remaining 10 percent.

As the aging of society is driving up overall health care spending, the financial contributions are straining the finances of health insurance associations. In recent years, a growing number of these entities have raised the premiums or even opted to disband.

The situation is bound to worsen in the coming years as the baby boomers start joining the oldest age group in 2022, further driving up the already hefty health care spending.

Health insurance associations and the business community have been calling for a hike in the share of the burden for this age group to 20 percent, in principle, to avoid imposing an excessive burden on younger generations.

At the end of last year, the government announced a plan to raise the share to 20 percent for elderly people who have a certain level of income. The move was followed by the launch of debate on the income threshold.

At a session of a health ministry advisory council held last week, five proposals were presented. One would raise the burden for people who belong to the top 20 percent of earners in a financing plan similar to the one for the public nursing care insurance program. Another would require people who are in the top 44 percent income level to pay 20 percent of their medical costs.

Increasing the ratio of elderly people who are required to pay 20 percent of their health care costs would curb the growth in the financial burden on the working population and in tax spending to cover the costs.

But the reality is that some 70 percent of Japanese aged 75 or older earn less than 2 million yen a year ($19,100). But the older people grow, the more health care services they require.

The average out-of-pocket payment by people aged 80 or order, who only have to cover 10 percent of the total, is larger than the sum paid by people ages 70-74, who shoulder 20 percent.

These facts should be kept in mind as policymakers make the decision.

The government is working to overhaul the social security system to provide security for all generations. It needs to be designed to pay sufficient attention to the livelihoods and finances of the working-age population while responding to risks involved in aging.

This challenge requires elderly citizens to share the social security burden as much as possible to support the social safety net.

The government needs to find a realistic solution to the challenge in line with the objectives of the “all-generation” social security system it envisions.