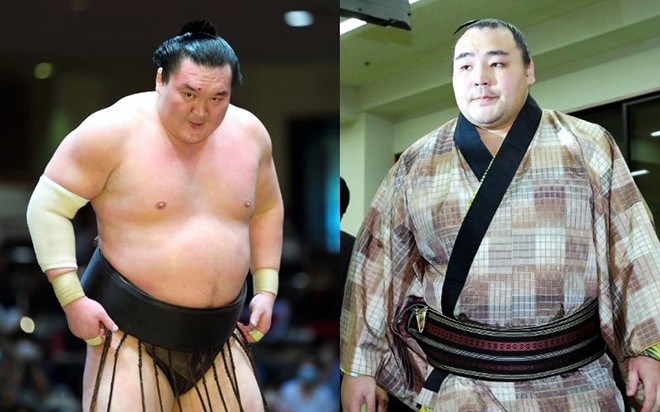 A sumo advisory panel is pushing hard on the two injury-plagued yokozuna to return to the dohyo in January in a highly unusual rebuke of their frequent absences from tournaments in the past two years.

The Yokozuna Deliberation Council issued the "caution" resolution on Nov. 23 against Mongolians Hakuho and Kakuryu, who are both 35.

Hironori Yano, council chairman, said he hoped the two yokozuna would return to action in the New Year tournament scheduled for Tokyo and asked that they “prepare with a strong resolve” while keeping in mind that this might be their last chance.

The caution has never been issued to a yokozuna. The only other time the deliberation council has issued a recommendation was in 2018 when it passed a resolution of “encouragement” to Kisenosato, who had struggled after being promoted to the sport's highest rank.

At one point, Kisenosato, the first Japan-born yokozuna in nearly 20 years, either sat out or did not finish eight consecutive tournaments due to nagging injuries.

After the encouragement resolution was issued, Kisenosato returned to the dohyo, but decided to retire after suffering three straight losses on the opening days of the January 2019 tournament.

On Nov. 23, the six council members in attendance unanimously approved the caution resolution for Hakuho and Kakuryu. The two were dealt with similarly even though there is a vast difference in their careers.

Hakuho has won the Emperor’s Cup a record 44 times, while Kakuryu has only done so six times.

One reason for treating the two in the same manner was that both sat out or did not finish eight tournaments of the 12 held since the Kyushu Grand Sumo Tournament in November 2018.

“We felt it was all right to separate past achievements when thinking about how the yokozuna should be from now on,” Yano said at a news conference. “The two cannot be said to have sufficiently fulfilled their responsibility as yokozuna. We made the decision to treat them in the same manner based on such consideration.”

But Yano was asked why the two were treated more harshly than Kisenosato who only completed two of the 12 tournaments he fought as yokozuna.

Yano said he felt the responsibility of yokozuna was greater now and also pointed out that Kisenosato only sat out four tournaments from the start.

“While he did not produce good results even as he stepped on the dohyo every tournament, fans were able to see him fight,” Yano said. “We felt we could not make a similar comparison for (the two current yokozuna).”

When Kakuryu decided to sit out the November Grand Sumo Tournament, his stablemaster, Michinoku, said that the next tournament that his charge competed in would determine whether he continued in the sport or retired.