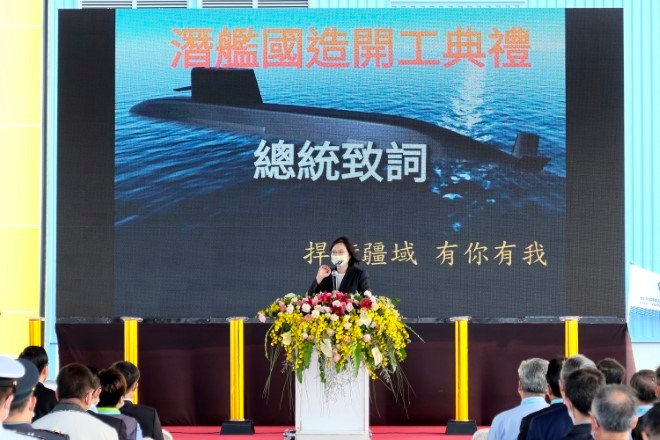 Taiwan’s President Tsai Ing-wen speaks during a ceremony to inaugurate the production of domestically made submarines at CSBC Corp’s shipyards in the southern city of Kaohsiung, Taiwan on Nov. 24. (AP Photo)

KAOHSIUNG, Taiwan--Taiwan’s president inaugurated the production of domestically made submarines Tuesday in the southern city of Kaohsiung, in a step forward for the island’s defense strategy at a time of elevated tensions with China.

“This submarine is an important part of allowing our navy to develop asymmetric warfare and to intimidate and block enemy ships from surrounding Taiwan’s main island,” said President Tsai Ing-wen. “Now, with the construction of the submarine to its future commission, we will certainly let the world know our persistence in safeguarding our sovereignty.”

Tsai has made boosting Taiwan’s indigenous defense capacity a central pillar of her defense policy. Recently, she relaunched the military aviation industry with the production of new trainer jets and has pushed for the development of more sophisticated systems by utilizing the island’s high-tech industries.

At the same time, she has gained approval from the U.S. for the purchase of billions of dollars in weapons, including upgraded F-16 fighter jets, armed drones, rocket systems and Harpoon missiles capable of hitting both ships and land targets.

China regards Taiwan as a breakaway province that is part of its territory and has been upping its threats to bring the island under control by force as economic and political enticements bear little fruit. China has stepped up military exercises towards Taiwan this year, flying fighter jets and reconnaissance planes on an almost daily basis toward the island of 24 million people, which lies 160 kilometers off China’s southeast coast across the Taiwan Strait.

Only a handful of countries around the world are capable of manufacturing submarines for modern warfare and Taiwan’s move toward that step has taken years. The Taiwanese subs’ designs have reportedly drawn on foreign expertise, despite the obstacles thrown up by China.

CSBC Corp., which is Taiwan’s largest ship builder and is partially government owned, was awarded a contract to design and build the subs in 2017, in partnership with arms developer National Chung-Shan Institute of Science and Technology.

Plans call for the building of eight indigenous submarines at an estimated cost of more than $16 billion, with the first one to be completed by 2024.

The project has already faced criticism over its cost. The design phase itself was estimated to cost around 3 billion Taiwanese dollars ($100 million).

The submarine has been in the design stage for four years, overcoming all sorts of difficulties that could not be revealed to the public, CSBC’s chairman, Cheng Wen-lon, said Tuesday.

Tsai, whom China despises for refusing to recognize Taiwan as part of Chinese territory, conceded that the program was a struggle, but said her government wouldn’t be deterred.

“Walking on this path that historically the government has never taken before, there were all kinds of challenges, and we were met with all sorts of doubts, but challenges and doubts won’t defeat us,” Tsai said, standing in front of the workshop where the submarine parts will be manufactured.

Legislators, the defense minister, members of the design team and the de facto U.S. ambassador to Taiwan, Brent Christensen, attended the ceremony at CSBC’s shipyard in the sprawling southern port city.

Although Washington has no formal relations with the island’s democratically elected government, it remains its main ally, and U.S. law requires the government to ensure that Taiwan can defend itself. Weapons sales to the island have increased in quantity and quality in recent years, especially under the Trump administration.

Facing a potential Chinese foe with overwhelming superiority in missiles, soldiers, ships and planes, Taiwan has struggled to assure its own people, as well as the U.S., that it is capable of and willing to defend itself.

Along with world’s largest standing military, numbering around 2 million members, China has the largest navy, with approximately 350 vessels, including two aircraft carriers and about 56 submarines. It also possesses around 2,000 combat fighters and bombers and 1,250 ground-launched ballistic missiles, considered a key strategic and psychological weapon against Taiwan.

Taiwan’s armed forces are a fraction of that number, with much of its ground force consisting of short-term conscripts, and its fleet numbers only around 86 vessels, roughly half of them missile boats for coastal patrol.

Taiwan’s navy presently has just two combat-ready submarines, versions of the Zwaardvis-class subs purchased from the Netherlands in the 1980s in a deal that led to a major diplomatic rift between Bejing and The Hague.