EDITORIAL: Abe’s lies about banquet funds finally come back to haunt him 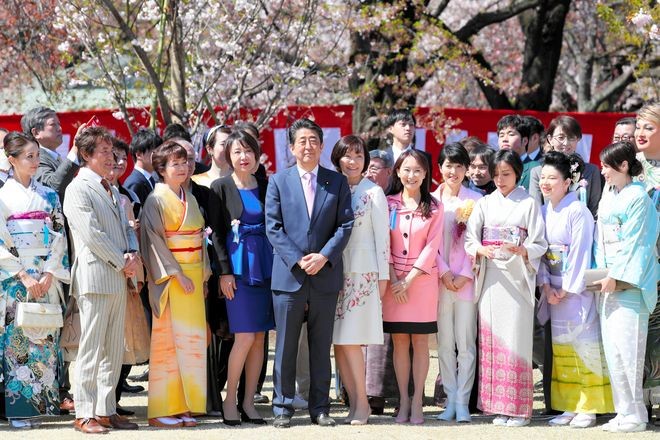 We now know that a sitting prime minister repeatedly lied in the Diet and elsewhere, blatantly ignoring the legislature’s supervisory function over the administration and undermining the public’s trust in politics.

We demand that former Prime Minister Shinzo Abe clearly explain himself for his unconscionable conduct.

Sources close to Abe admitted to reporters from The Asahi Shimbun and other news media that Abe’s official support organization had partially covered the cost of banquets held on the eve of annual taxpayer-funded sakura cherry blossom viewing parties. The total amount paid for the most recent five years is said to have exceeded 9 million yen ($86,130).

The evening banquets were held at hotels in central Tokyo from 2013--the year after Abe began his second stint as prime minister--through 2019. The guests, who were mainly Abe’s supporters from his constituency in Yamaguchi Prefecture, paid 5,000 yen per person.

But questions were raised in the Diet about this unrealistically low fee, triggering suspicions that Abe’s support organization was bankrolling the event. Moreover, the organization did not list the costs of the events in its income and expenditure reports on political funds, a possible legal violation.

Abe consistently responded to these questions with inane excuses, such as the hotels set the banquet charges and the guests paid the hotels directly. He said that meant the support organization had nothing to do with the transactions, so there was no need to report them.

But the fact that the organization paid the difference between the cost of the banquets and the fees charged to guests suggests that not only did Abe give false explanations in public but also his organization could have violated the Public Offices Election Law, which bans making an endowment to voters, and the Political Fund Control Law by failing to report the expenditure for the events.

Abe’s integrity as a Diet member must certainly be called into question.

In response to a criminal complaint filed by a group of lawyers and scholars, investigators from the Tokyo District Public Prosecutors Office have taken voluntary depositions from Abe’s state-paid aide and senior accountant at his support organization. The investigators are said to be carefully weighing the prosecutability of the case.

Abe on Nov. 24 told reporters he is cooperating fully with the investigation but declined to elaborate, saying, “I cannot comment at this stage.”

Sources close to Abe maintained that the former prime minister had been given “incorrect information by his aide.” But even if that was the case, Abe is still to blame for naively believing his aide and neglecting to verify the information.

The sakura viewing parties themselves have also triggered controversy.

As a result of Abe’s office broadly soliciting individuals involved with his support organization to attend the events, the number of guests grew explosively. That, in effect, was tantamount to using these publicly-funded parties to advance his own interests.

Many other problems also surfaced over the management of official documents, including the destruction of guest lists for the sakura parties. Questions also remain over suspicions that an invitation card reserved for individuals recommended by Abe himself was sent to the former chairman of Japan Life, whose investment scam bilked many victims.

Abe’s successor, Prime Minister Yoshihide Suga, is attempting to sweep the whole scandalous mess under the rug by declaring he would not hold a cherry blossom viewing party.

But Suga bears a heavy responsibility for having interfaced the public amid the scandal as Abe’s chief Cabinet secretary.

In a manner of speaking, Suga is duty-bound to drain the cesspool left by the previous administration and urge Abe to fulfill his accountability.