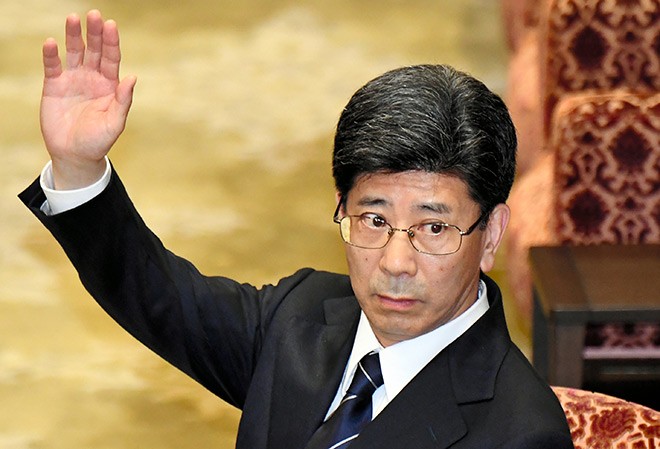 Nobuhisa Sagawa, the director-general of the Finance Ministry's Financial Bureau, responds to a question in the Lower House Budget Committee in March 2018. (Asahi Shimbun file photo)

The examination by the Lower House research bureau did not state if they were outright lies or whether the officials answered in the belief they were telling the truth.

What is clear, though, is that replies differed from the facts already known to some people at the time, or which later emerged, creating the impression the Abe administration was ever willing to be economical with the truth even in the legislative body.

Bureau officials were asked to go over Diet testimony given between Feb. 15, 2017, and July 22, 2018, regarding the falsification of official documents related to the negotiations and sale of land to Moritomo Gakuen at a massive discount.

In many of the cases, government officials contended documents had already been discarded or did not exist when in fact digital and other documents were still in the possession of the Finance Ministry.

The results were presented at the Nov. 24 session of the Lower House Financial Affairs Committee in response to a question by Hiroshi Kawauchi, a member of the opposition Constitutional Democratic Party of Japan.

Lower House research bureau officials based their study on two documents released in June 2018. One was a report compiled by the Finance Ministry after it investigated the falsification of documents by its own officials. The other document was a report by the Board of Audit submitted to the Upper House Budget Committee.

Research bureau officials counted the number of Diet responses that differed from what was found in the two reports.

The responses most false were in connection with the existence of records of negotiations and consultations between Finance Ministry officials and those connected to Moritomo Gakuen as well as the Osaka prefectural government. The state-owned land was sold to the educational institution at far below its market value.

This inevitably raised questions about Prime Minister Shinzo Abe's ties with Moritomo Gakuen, especially as his wife Akie once served as honorary principal of the elementary school that Moritomo Gakuen planned to open in Toyonaka, Osaka Prefecture. The Finance Ministry is still headed by longtime Abe crony Taro Aso.

On 71 occasions, government officials said in the Diet that documents had already been destroyed or did not exist.

For example, on Feb. 24, 2017, Nobuhisa Sagawa, serving at the time as director-general of the Finance Ministry's Financial Bureau, said the pertinent records had been destroyed.

“There are no (other) records of the negotiations between the Kinki Local Finance Bureau and Moritomo Gakuen,” he stated.

In fact, the records were stored in the computer system that Finance Ministry officials could access.

Sagawa and other officials on eight occasions said there were no records of ministry officials meeting with politicians or their associates regarding the land deal when in fact there were.

On five occasions, Keiichi Ishii, who was the transport minister, and others said they had submitted all documents related to negotiations between the local bureau of the transport ministry, which owned the Toyonaka plot, and officials of the Kinki Local Finance Bureau and Moritomo Gakuen. This also was untrue as some documents were not submitted to the Diet.

Asked about the large number of discrepancies in Diet responses, Yukihiro Oshika, the current director-general of the Finance Ministry’s Financial Bureau, said: “While I believe there is room for debate about what constitutes false responses, the fact is that responses were made in the Diet. For that I would like to extend my deepest apologies.”

Kawauchi said in response to questions from The Asahi Shimbun, “Since they responded that no documents existed when there were records, the responses are, in effect, falsehoods. It is an expression of the low regard held by the Abe administration toward the Diet.”