‘Go To’ programs under fire in Diet after two cities suspended 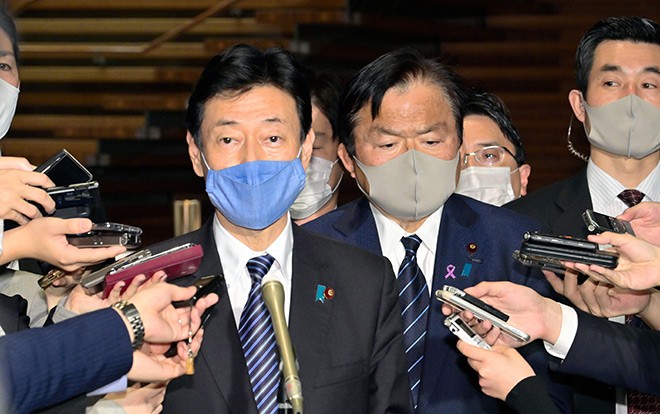 The central government’s “Go To” campaigns designed to revive struggling industries are further eroding as local governments have opted out of the programs to counter the surge in novel coronavirus infections.

Although the government has urged caution concerning its Go To Travel and Go To Eat programs, opposition parties have suggested the programs be scrapped in light of the third wave of COVID-19 cases that have hit various parts of the country.

The central government on Nov. 24 decided to drop two major tourism markets, Sapporo and Osaka, from the Go To Travel program following formal requests by the governors of Hokkaido and Osaka prefectures to suspend their capital cities from the campaign.

The exclusion became effective immediately and will continue until Dec. 15.

The deep discounts provided under the Go To Travel campaign will no longer apply to reserved trips to Osaka and Sapporo with departure dates between Dec. 2 and Dec. 15.

People who have already booked hotels or arranged travel packages in the two cities during the three-week targeted period will not receive the promised benefits.

If they want to forgo these trips, they must scrap the plans by Dec. 3 to avoid cancellation fees. Those who decide to cancel after Dec. 4 may be further out of luck.

The central government’s decision, however, appears to contain many loopholes.

According to the tourism ministry, same-day round trips mainly within the two cities and longer visits using accommodations in the cities will be ineligible for the subsidies.

But a sightseeing tour in Sapporo that stays overnight in a neighboring city remains eligible for the discount.

To help tourism operators in Sapporo and Osaka, the central government will cover 35 percent of the cost of trips that are canceled by Dec. 3.

Health experts have warned the central government that the tourism promotion program is contributing to the rising number of infections.

However, tourism minister Kazuyoshi Akaba denied such assertions, saying at a Nov. 24 news conference, “There is no evidence.”

He then emphasized that the government’s decision to remove Sapporo and Osaka from the campaign is “all just a preventive measure.”

For that reason, he said, residents of Sapporo and Osaka remain eligible to receive discounts under the campaign when they travel outside of the cities.

But some local leaders have pointed out that allowing discounted travel for people living in the areas where the infections are spreading does not make much sense.

Tokushima Governor Kamon Iizumi, who heads the National Governors’ Association, on Nov. 24 demanded Yasutoshi Nishimura, the state minister in charge of economic revitalization who is also the central government’s point man in dealing with the pandemic, to make such outbound trips ineligible for the Go To Travel discounts, as well.

Other governors may follow Hokkaido and Osaka’s steps and ask the central government to review the travel campaign.

Under the Go To Eat program, local governments have offered premium discount coupons, meal vouchers and a point system to entice residents to dine outdoors to support restaurants and bars.

The central government on Nov. 24 once again asked local governments to suspend such promotions in areas where COVID-19 cases are surging. Prefectures in the Tokyo area have already done so.

Kanagawa Prefecture has decided to suspend sales of the meal vouchers from Nov. 25.

Saitama Prefecture on Nov. 24 announced that it will soon end sales of the meal vouchers and place restrictions on their use.

Opposition leader Yukio Edano criticized Prime Minister Yoshihide Suga in the Diet on Nov. 25 over the government’s repeated changes to the Go To campaigns.

“You’ve said, ‘Please go to travel, and please go to eat.’ Then it is a matter of course that the virus infections are spreading,” Edano, head of the Constitutional Democratic Party of Japan, said to the prime minister at a Lower House Budget Committee meeting.

Suga reiterated the government’s stance that the campaign is necessary and is helping businesses that have been damaged in the pandemic.

“There are 9 million people in the (tourism industry), working at hotels or as taxi drivers, providing food and selling souvenirs. These people are barely staying employed and making it through due to the Go To Travel campaign,” Suga said.

He said he has listened to health care experts and others who have urged the government to review the Go To campaigns, but he suggested he has no plans to suspend the programs.

(This article was written by Satoshi Kimura and Shinya Takagi.)