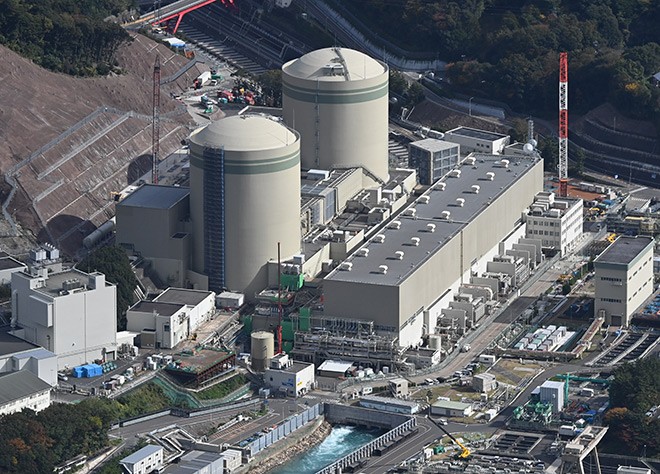 The No. 1 and 2 reactors at the Takahama nuclear power plant have been in operation for more than 40 years. (Tatsuo Kanai)

Under revisions to the nuclear reactor regulation law that took effect in July 2013, reactors can in principle only operate for 40 years, with a single extension of 20 years in exceptional cases.

A majority vote by the Takahama town assembly approved a resumption of operations. It is the first regarding a plant in operation for more than 40 years.

Kansai Electric is seeking to resume operating the No. 1 reactor in March 2021 and the No. 2 reactor the following May.

Next up in the approval process is Yutaka Nose, the Takahama mayor who is expected to announce his decision in December. After that the Fukui prefectural assembly and Fukui Governor Tatsuji Sugimoto will be required to give their respective approvals.

The two Takahama reactors are among only four in operation for more than 40 years that have passed safety screenings mandated by the Nuclear Regulation Authority. The other two are the No. 3 reactor at Kansai Electric’s Mihama plant and the Tokai No. 2 plant in Ibaraki Prefecture operated by Japan Atomic Power Co.

Since the Fukushima nuclear disaster, 14 reactors in operation for more than 35 years have been decommissioned. The figure does not include the Fukushima No. 1 plant reactors.

The Mihama town assembly is expected to make a decision about the No. 3 reactor in December. But no moves have been made to seek local government approval to resume operations at the Tokai No. 2 plant.