Aesthetic beauty of samurai swords on show in Yamanashi 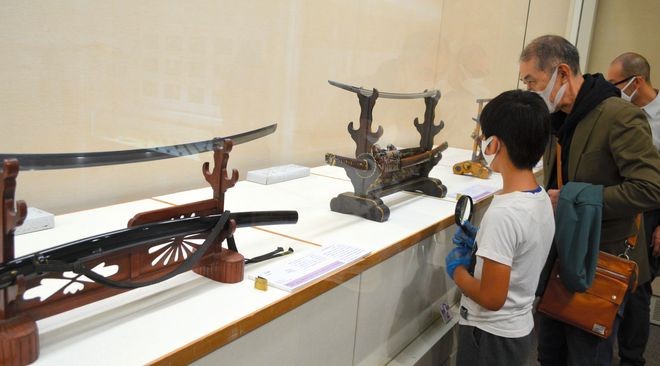 Visitors look at masterpieces of Japanese swords at the Museum Tsuru in Tsuru, Yamanashi Prefecture, on Nov. 7. (Akihiro Kobuchi)

TSURU, Yamanashi Prefecture--Showcasing some of the nation's top swords and fittings, a special exhibition at the Museum Tsuru here is exploring the aesthetic beauty of samurai blades.

One of the highlights is a Muramasa blade forged in the mid-Muromachi Period (1336-1573), which was once wielded by Prince Arisugawa Taruhito, who served as commander in chief of the Meiji government army in the Boshin War (1868-1869).

The exhibition runs until Jan. 24 in the city's Kamiya district.

Japanese swords are typically considered more of exquisite works of art than weapons, and there are many enthusiasts at home and abroad.

When the museum held a special exhibition devoted to Japanese swords in fiscal 2018 to promote the charms of the blades, it attracted many visitors from around the country and many of them called for another event.

The second offering is jointly organized by the Yamanashi branch of the Nihon Bijutsu Token Hozon Kyokai (NBTHK), or the Society for the Preservation of Japanese Art Swords. The prefectural branch is headed by Mitsuru Ito.

"It is the first attempt for an exhibition devoted to Japanese swords held in Japan (to put the blades in katana-kake). We hope visitors share the same line of sight with feudal warriors to look at the swords and feel their aesthetic beauty," said curator Kohei Hattori.

Sword fittings on display at the venue include 12 iron handguards created by Kaneie and another 12 pieces made by Nobuie. The two artisans were hailed as great masters, with each representing the eastern and western parts of the country, respectively.

There is also a masterpiece handguard created by Hayashi Matashichi, which is featured with inlaid patterns and designated as an important cultural property.

The venue is closed on Mondays (except national holidays), year-end and New Year holidays and Jan. 12.